Electrification is one of the hottest trends shaping the mobility and automotive industries, as decarbonisation in the transport industry gathers pace. In 2021, fully electric cars (BEVs) accounted for 6.8% of new vehicle registrations across 42 major economies – up from 3.9% in 2020. Yet electric vehicle (EV) adoption has not been uniform. Northern and Western European countries have led the race, while most developing and emerging markets and some advanced nations including Japan and the US, have trailed behind. Higher consumer affluence contributes to a greater uptake of electric vehicles, but other factors such as boosting demand-side policies with financial incentives and tax policies, providing ample charging infrastructure and delivering strong sustainability awareness, can help countries to catch up.

Favourable incentives and policies place Northern and Western Europe ahead 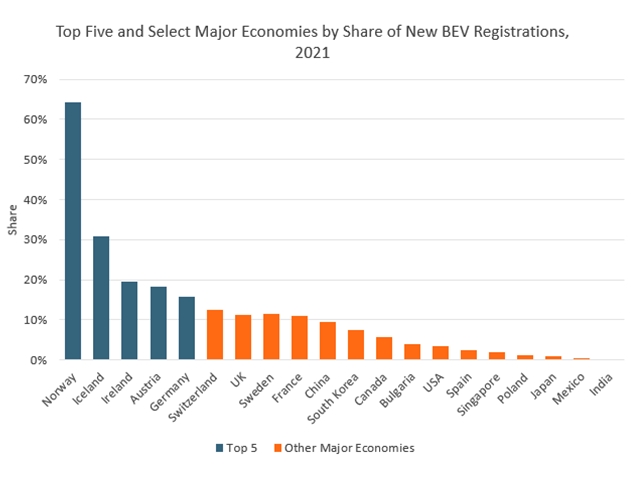 Norway became the poster child for the shift towards EVs, having registered a fivefold rise in BEV registrations over 2016-2021. By 2021, nearly two thirds of all new passenger car registrations were purely electric, and this can be ascribed to a plethora of demand-side policies which made EVs cheaper than internal combustion engine vehicles (ICE). For example, EVs in Norway are exempt from sales, import, road, and value-added taxes. The country also provides attractive perks for EV owners such as exemptions from road tolls, reduced ferry rates, lower parking fees and the opening of bus lanes to EVs. Indeed, Norway’s performance has been exceptional, having already surpassed the net-zero pathway which the International Energy Agency published in May 2021, suggesting that 60% of new car sales need to be BEVs.

Other Northern and Western European countries have employed similar strategies, but have also benefited indirectly from favourable energy prices and geographic composition. Iceland provides zero registration taxes on vehicles with emissions up to 75 g/km meaning that BEVs and other low emissions vehicles are covered. In addition, consumers are incentivised to make the switch due to lower electricity prices compared with fossil fuel prices, reducing the cost of running EVs. Ireland offers grants of up to EUR5,000 for passenger car BEVs and up to EUR3,800 for commercial BEVs. Furthermore, the country’s small size limits the distance travelled between cities and this helps curb range anxiety – the fear of running out of fuel before finding a charging station.

The US and Japan have been surprisingly slow in transitioning to EVs. In the US, BEVs accounted for 3.4% of new passenger car registrations in 2021, while Japan fared even worse with a mere 0.8%. The transition in the US has been held back by low fuel prices, high demand for gas-guzzling SUVs and too few government incentives. Even with the Biden administration vowing that half of all new vehicle sales should be zero-emissions starting in 2030, this is not a mandatory policy.

Japan had initially embraced the switch to lower emission fuels with hybrid electric vehicles. In 2021, Japan recorded 2.2 million new hybrid electric vehicle registrations – considerably higher than other major economies such as the US (770,000), Italy (527,000) or the UK (492,000). However, pure electric vehicles have struggled. Weak charging infrastructure development and the slow rollout of EV models by domestic manufacturers have reduced consumer appetite for EVs.

China has been a powerhouse in the transition to EVs. In volume sales terms, it is the largest market for EVs, having recorded 2.1 million BEV registrations in 2021 – an 86% rise from the previous year. While the country has not repeated the success of some Northern or Western European countries in terms of EV growth, it is flexing its muscle in broadening the supply of more affordable models and removing the stereotype that EVs are a luxury purchase. The Wuling Hongguang Mini EV from SAIC, General Motors and Wuling, has been dubbed as the cheapest electric vehicle on the market, coming in at just USD4,500. In 2021, it was the best-selling electric vehicle in China with 395,000 units – well above second-placed Tesla Model Y with 169,000 units.

Indeed, the provision of cheaper models will also benefit other less affluent consumers, especially in emerging and developing markets, which have been slower in transitioning to EVs. According to Euromonitor International’s Voice of the Consumer: Mobility Survey, 61% of global respondents highlighted cost as the biggest factor discouraging them from buying an EV. This partly explains why affluent Northern and Western European countries have performed better in their transition to EVs due to higher income per household. 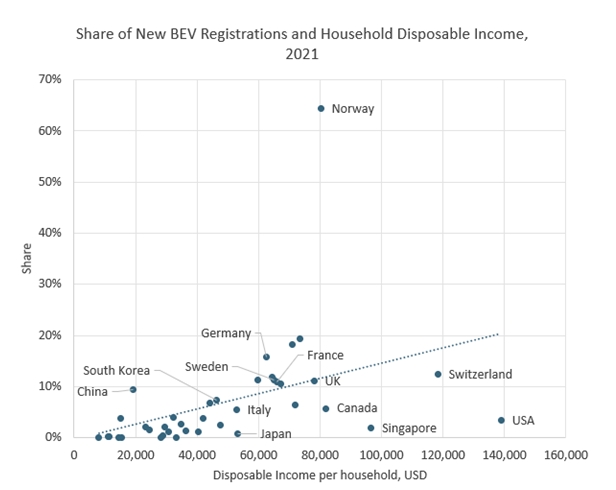 Tax policies, consumer perks and financial incentives play key roles in spurring the EV transition. However, other important factors such as broadening the supply of EV charging stations and increasing sustainability awareness can supplement the shift. In Euromonitor International’s Voice of the Consumer: Mobility Survey, 42% of global respondents suggested not buying an EV because of poor charging infrastructure. This is a causing a bottleneck to the industry’s growth, as range anxiety is one of the most popular arguments against purchasing an EV. Developing clear strategies and ambitious goals to enlarge the supply of charging stations will be critical for governments seeking to catch up in the EV transition. 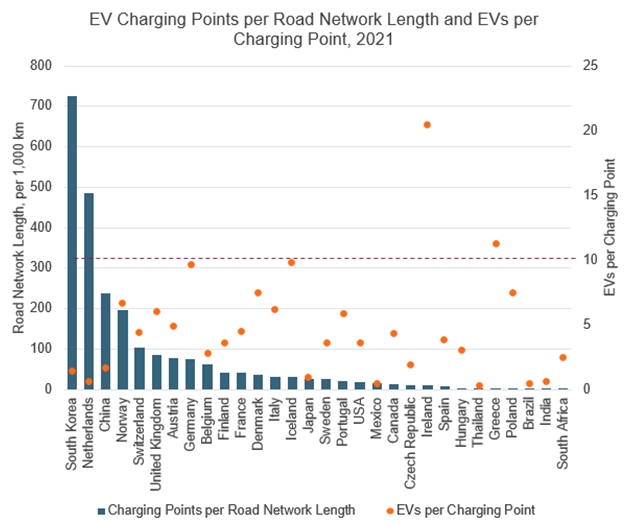 Note: Line indicates the ratio of EVs to charging points. According to the IEA, a 10:1 ratio is recommended at the European level. Higher figures indicate a lack of charging stations.
Source: Euromonitor International from trade sources/national statistics/International Road Federation

Sustainability awareness can also assist EV expansion, especially against the backdrop of numerous international treaties and summits such as the Paris Agreement on Climate Change and the 2021 United Nations Climate Change Conference. The target to reduce carbon dioxide emissions by 45% compared to 2010 levels by 2030 and achieve net-zero emissions by 2050 as part of the Paris Agreement signed by 196 parties in 2015, has been a calling point for EVs, which have ridden the wave of interest in sustainable mobility. It has involved countries rolling out phase-out policies that ban the sale of new internal combustion engine vehicles. Norway has been the most ambitious by banning new ICE vehicle sales by 2025 while the UK, Ireland and Netherlands aim to achieve this by 2030. As governments place a greater emphasis on sustainability, consumers and businesses are likely to adjust their purchasing habits in favour of less polluting vehicles.