More and more industrial companies are being affected by U.S.-China trade tensions. To date, the introduced import tariffs by the U.S. mostly included B2B products such as electronic components, automotive parts, machinery, metal products and others.

This was less hurtful to American consumers, as costs of the introduced import duties have been split by numerous supply chain participants and the supply of goods has been sufficiently diversified. Chinese-based, including American-origin, companies have absorbed the losses by lowering profit margins and passing some of the higher costs to final consumers.

The implications of the first tariffs are already represented in Euromonitor’s 2018 trade statistics. Among the key industries such as household goods and hi-tech goods, the USA’s share in China’s exports dipped by 4.0 percentage points. and 1.5 percentage points in USD terms respectively, while the largest loss was registered in the rubber and plastic industry, down by 5.2 percentage points.

As the U.S. and Chinese trade negotiators fail to reach an agreement, both countries are planning even more aggressive retaliatory actions, targeting not only B2B products but taking a larger scope of consumer products as well. This would not only have a more notable impact on both economies but also affect global supply chains.

If all-inclusive tariffs are introduced, the highest negative impact is bound to be felt by household goods, hi-tech and textile products industries, as these industries in both countries are tightly interconnected.

The U.S. relies heavily on low production costs in China for most consumer goods, while China enjoys strong market potential in the USA for its products. Despite some opinions, the American market is largely irreplaceable for Chinese manufacturers; similarly, an ever-expanding Chinese market is irreplaceable for American corporations seeking growth.

The trade barriers would also have a massive impact on the aforementioned industries’ key suppliers in China as well as American manufacturers that purchase Chinese parts and subassemblies. American households as final consumers would also be increasingly dragged into the trade war and potentially experience notable price increases for goods like electronics and leisure products, at least for the mid-term, until the global economy adjusts to the new status-quo. 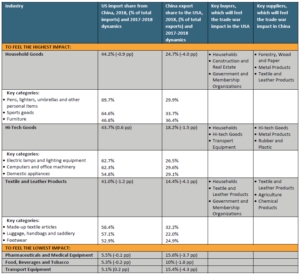 The lowest direct impact would be felt by industries, such as food, beverages and tobacco and pharmaceuticals and medical equipment, which are significantly more localized compared to other industries and where the trade share is already relatively limited.

The U.S. has a better diversified import structure regarding these industries and local production is reasonably competitive. Nevertheless, input prices for those industries would rise for the American manufacturers, limiting future growth opportunities due to affected profit margins.

Euromonitor International expects the largest losses in trade to be inflicted on hi-tech goods makers in the nearest term. Hi-tech is seen as one of the key areas which American politicians are concerned about, due to growing China’s technologies adoption around the world. Google’s recent decision to halt cooperation with China’s Huawei is significant. As Huawei already has a very limited area to manoeuvre, due to blacklisted telecom equipment sales in the U.S., Google’s decision is threatening Huawei’s global operations in the smartphone sector.

Other low-cost alternatives to China set to benefit

The decline of China’s role in U.S. import dynamics is most likely to continue if current trends persist. If wider import tariffs are introduced by the U.S., followed by an adequate response from China, trade routes should shift away from China to nearby low-cost countries, primarily regarding the lowest value-added and price-sensitive products trade. On the other hand, the trade war creates abundance of opportunities for other low-cost countries to spur manufacturing output, with Southeast Asian and Mexican industries the likely main beneficiaries.

Learn more in our article: US-China Trade War Escalation Unlikely to Derail Growth, But Raising the Risk of a Global Downturn