Oil is one of the “seven necessities to begin a day” for Chinese people (together with firewood, rice, salt, sauce, vinegar and tea). In Hong Kong, the two local giants Lam Soon and Hop Hing, which own the brands Knife and Lion & Globe, respectively, have had their signature peanut oils deeply ingrained in both retail and foodservice for more than five decades. But since 2010, such dominance of both big players’ share and traditional oil demand has been continuously challenged.

To illustrate, the market witnessed gradual wane of the combined market share (in retail value terms) of Lam Soon and Hop Hing. It dropped from 80% in 2010 to 67% in 2019, but mostly due to Lam Soon’s smaller brand Red Lantern - significantly dragging down its lead. This naturally prompts the question: What are the growing types of oil in Hong Kong?

Olive oil - still niche, but not as niche as it was

Olive oil started to become more popular in Hong Kong at the beginning of this millennium. Its distinctive health benefits stood out from conventional oil types in Hong Kong and stirred up unprecedented disruption in the market.

For instance, it can reduce bad cholesterol in the blood and thus alleviate the risk of cardiovascular disease. The fresh and fruity aroma also makes it a decent match with western cuisines such as salad, cold dishes and spaghetti. But it is indeed western-style cookery TV shows and online blogs that played a pivotal role in demonstrating olive oil’s gastrological and health benefits and further speeding upconversion.

Hence, in the past decade, consumers in Hong Kong have been more willing to pay a premium to embrace these advantages of olive oil. Nonetheless, after gaining a considerable level of popularity, olive oil has been slowing down its growth pace from an annual 8% in 2014 to 4% in 2019. As the competitive arena of edible oils intensifies, other crouching tigers have woken up to take a slice of the market.

“Other vegetable and seed oils” (which includes peanut oil) is the category that registered the highest market growth of HKD159 million in 2014-2019. Given that peanut oil is already a highly-saturated segment, such skyrocketing growth is likely to stem from other niche oil genres. In fact, the growth of these niche oils rides on consumers’ heightening sophistication about specialist oil usage.

Hong Kong consumers are more familiar with the uses of edible oils, and more of them believe that no oil is flawless - different oil types possess distinctive sets of attributes that suit specific cooking purposes.

For instance, the vigorously emerging chia seed and flaxseed oils have high nutritional value but their low smoke point allows fewer applications compared to peanut oil, which is conventionally perceived as “lower quality”. As a result, more and more households in Hong Kong prefer equipping themselves with more than one type of edible oil. This fosters the positive cannibalisation that is evident within other vegetable and seed oils, i.e. other niche oils are grabbing more consumers’ attention, while the most popular and budget peanut oil can still retain growth.

Nowadays, oil is not just for cooking. More consumers treat the direct intake of some oils as nourishment. Coconut oil outshines others in this regard. This oil type is found to contain a wide extensity of health benefits, such as preventing cardiovascular disease, diabetes, periodontal disease and osteoporosis. Due to its antibacterial and antioxidant nature, coconut oil can also be applied to the skin as a moisturizer, sunscreen, and to combat wrinkles. Even the Food and Drug Administration (FDA) in the US endorsed coconut oil as “Generally Recognized as Safe” (GRAS); one of the world’s most stringent qualifications in terms of food safety and healthiness.

Therefore, coconut oil brands like Tropicana, You, Nutiva and Spectrum are all the rage, particularly in the realm of internet retailing. Consumers’ curiosity and keenness to try out this brand new, reasonably-priced and naturally-healthy nourishment are expected to boost sales of these rising stars. This phenomenon applies also to other vegetable and seed oils, like flaxseed oil and avocado oil, which have their own sets of health advantages. 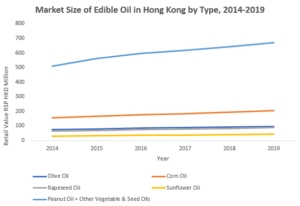 In 2019-2024, other vegetable and seed oils are expected to grow at an even more accelerated CAGR of 7% compared to the 4% growth in 2019. Big players are not the only ones to stay tuned to the development of this exciting category - consumers probably need more storage space in their kitchen, as well as greater sophistication to be able to select from these niche oils.

Confectionery Faces Further Uncertainty After a Year of Recovery