Coronavirus (Covid 19) has increased consumer awareness of nutrition, health awareness and food safety and put nutrition at the forefront, as the holistic approach to wellness has accelerated. Beyond its role in health and nutrition, people are following a “better-for-you” trend in food consumption, leading to the emergence of many new products and brands. Texture, taste, mouthfeel, and flavor fusions are becoming more prominent, and people are increasingly turning towards meat substitutes for health and environmental benefits. With the rising demand for alternative protein in Southeast Asia, meat substitutes have the potential to grow in the region in 2021 and beyond.

Meat substitutes have been gaining traction in recent years owing to lifestyle trends. China and Japan lead in total consumption of meat substitutes, followed by South Korea, Malaysia, Indonesia, and the Philippines. Meat substitute brands have been quick to leverage on this increasing demand from consumers. The momentum expands to foodservice growth as well, whether as a way to serve healthy fast food or to reduce the personal climate impact by substituting beef with plant-based meat.

For example, Beyond Meat has partnered with Starbucks and KFC. Local brands such as Zhenmeat and Starfield have also emerged in China; similarly, Omnipork in Hongkong, while in South East Asia, there is Growthwell Group in Singapore and Let’s Plant Meat in Thailand. 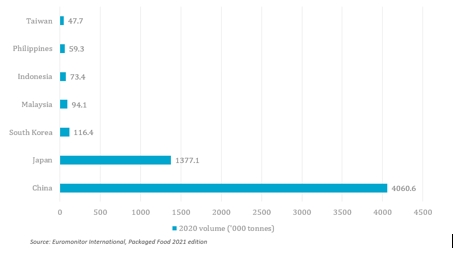 In Southeast Asia, both tofu and tempeh (fermented soybeans) are popular meat substitutes and are an integral part of daily consumption, with tofu contributing to over 98% of packaged meat substitutes in the region. Tofu and tempeh are typically found in dishes such as Tempeh Penyet in Indonesia, Adobong Tokwa in the Philippines, and Laksa in Malaysia and Singapore. With consumer habits, familiarity and taste preferences skewed towards these local flavors and formats, it is difficult for new generation meat substitutes to penetrate the market. Nevertheless, these brands have been actively pursuing their entry into the market via foodservice channels and there is still a lot of room for meat substitutes to grow in Southeast Asia.

Given the increasing number of competitors entering the market, a strong brand name is integral in establishing a foothold in the market. For example, Beyond Meat has a strong brand name and manages to establish itself months in advance of its introduction into a new market. Beyond Meat was launched into retail channels in 2019 and is also available on e-commerce sites. Impossible Food entered Singapore in 2020 by penetrating retail channels.

Another global brand that has entered the region is Quorn, using a more localised approach by opening an application research center in Singapore. Prior to future regional expansion, the brand has had a presence in mainstream retailers along with foodservice collaborations (with Soup Spoon) in Singapore for meatless menus using Quorn products.

The rise of flexitarianism

The rise of flexitarianism also provides opportunities for meat-alternative players. Moderation of meat in diets makes meat-alternative products look promising with Southeast Asian consumers trying to limit their meat intake. This is partly due to religious influences and growing health and environmental concerns. Religious reasons hold significance in countries like Thailand and Vietnam where vegetarian diets are associated with Buddhism and even non-vegetarian consumers consume vegetarian food during occasions like Vesak Day.

Healthier choices, meat texture, and local taste profiles are key to wi in this space

South East Asian consumers are also increasingly giving importance to self-image and health, causing them to turn towards healthier food choices. This is especially true in the post-pandemic world. While many meat alternatives try to mimic beef in terms of texture and mouthfeel, pork needs to be taken into consideration too, as pork is more widely consumed than beef in this region. Players also need to adopt a localised approach when they enter this region.

Through localisation, Omnipork has been successful in establishing its presence in this region and by emulating its success, other new generation players can also create mass appeal and establish a foothold in this region. Ultimately, the pandemic is expected to accelerate the market for meat alternatives in countries with higher disposable income like Singapore and Malaysia. The impetus to gradually ease out meat may not be as high in other Southeast Asian markets, however, the demand for cleaner food can definitely be seen during the crisis.

According to Euromonitor’s 2020 Lifestyles Survey, more than half of South East Asian consumers believe that they will be healthier in five years than they are now, and they believe that climate change will impact them more, five years from now. It is considerations such as this that will shape demand and opportunities for purposeful food both now and in the future.

For more information, read our Packaged Food reports and connect with me on LinkedIn.