As the global climate continues to warm up, political efforts mirrored in society have set forth a vision of a carbon neutral or net zero economy. On the level of individual companies, most large Western companies have stated their plans to achieve this at some point by 2050. In fact, annual sustainability reporting is mandatory for companies of public interest with more than 500 employees in the EU, and the requirements are set to become stricter from 2023 (with first reports published in 2024). China is also making gradual moves toward mandatory reporting of environmental, social and governance indicators for listed companies. For now, extensive reporting on the environmental impact is only mandatory for businesses that are considered key polluting entities.

When asking businesses about their climate investments, energy efficiency and effectiveness top the list of investment priorities, with the majority of surveyed companies currently investing or planning to invest in these areas in the next few years. In comparison, only 36% of companies are combining efficiency gains with offsetting, notably buying shares in tree planting projects, while only 13% use carbon capture, for example by capturing and reusing the CO2 exhausts in chemical manufacturing or restoring soil carbon in agriculture. Both offsetting and carbon capture (also known as on-setting because the activity is done on-site) are actions that can move a company’s environmental balance to net zero. 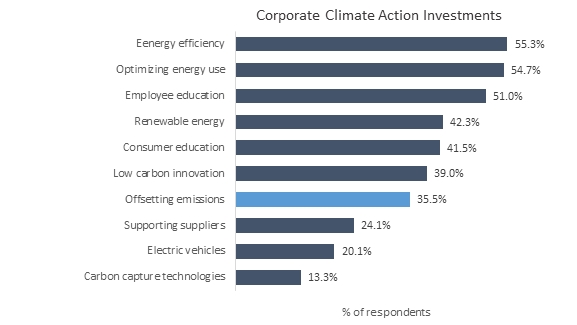 As evident from Euromonitor International’s Product Claims and Positioning data, the popularity of the carbon neutral/carbon reduced claim is growing, especially within Hot Drinks, Packaged Food, and Tissue and Hygiene. Nevertheless, when comparing the number of SKUs with the claim to the total number of SKUs, the share carrying such claims is typically under 0.1% for a given industry. However, in a context of climate conferences, consumer activism and extreme weather events, such fast growth from low levels looks similar to when meat substitutes and milk alternatives initially took off, a decade or so ago. 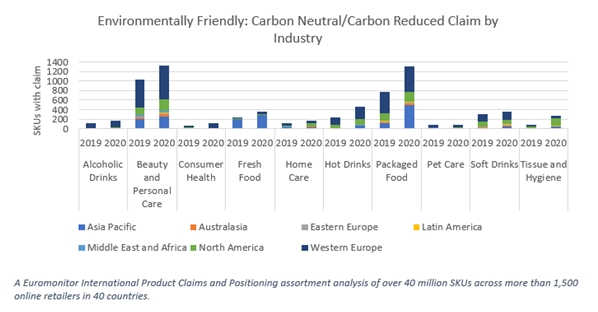 As noted in negotiations at the Climate Conference COP26, Western Europe and North America are driving the agenda. These are the regions that have pushed for a global agreement to phase out fossil fuels and these are the regions where companies apply the claim the most. While 46% of Western European respondents in the 2021 edition of Euromonitor International’s Voice of the Industry: Sustainability Survey claimed that sustainability investments are made to comply with legislation, a full 69% of professionals stated that customer perceptions/brand reputation also had a role to play.

Asia Pacific makes a visible contribution of SKUs in Fresh Food and Packaged Food. The Fresh Food contribution is driven by South Korea’s Ministry of Agriculture, Food and Rural Affairs, which issues the Good Agriculture Practice (GAP) certification for farms that produce with higher climate efficiency than the national average for the same product. In online stores, some 0.4% of fruits are GAP certified. This shows the importance of relevant and fair labelling schemes as a single country’s unique climate certification scheme makes Asia Pacific the industry’s leading region for carbon neutral claims. Climate certification is upcoming in other countries too; for example, the Svenskt Sigill climate certification for Swedish food and flowers. However, a comprehensive standard valid across countries is still nowhere to be found, especially one applicable to packaged food containing many ingredients.

A widely accepted climate certification, even if just for a single industry, would be a way for businesses to address the confounding situation around communicating carbon neutrality and net zero ambitions in advertisement. An internationally-viable standard accounting method would give the best motivation for multinationals to invest in climate certification, which is currently lacking.

For example, Arla Foods launched net zero organic dairy in Sweden in 2019. All greenhouse gas (GHG) emissions from this range are either reduced or compensated for (offset). The organic Arla farmers in Sweden use only renewable electricity and will use 100% fossil-free fuel by 2022, according to the company. Arla Foods, however, is facing a lawsuit from Konsumentombudsmannen, a government agency, which argues that the claim misleads consumers.

The Swedish advertising industry self-regulator Reklamombudsmannen disallowed 17 advertisements claiming some form of better for the climate in 2020 and 2021, while approving none. German and UK counterparts are taking the same stance. The UK’s Advertising Standards Authority in 2020 even disallowed Quorn’s claim that consumption of its meat substitutes was a “step in the right direction” and a reduction of carbon footprint. All call for ”very strong proof” according to ”widely accepted methods” of measuring sustainability when making environmental claims.

Meanwhile, the European Commission (EC) and national consumer authorities released in January 2021 the results of a study conducted to identify possible breaches of EU consumer law on websites of companies claiming to sell environmentally-friendly products.

According to this study, greenwashing is growing as consumers increasingly seek to buy environmentally-sound products. Results show that 37% of companies use vague claims such as “conscious”, “eco-friendly” or “sustainable”, which according to the study, gives the consumer the unsubstantiated impression a product had no negative impact on the environment. Businesses will need to provide easily accessible evidence to support the claim and enough information for the consumer to judge its accuracy or they will be at risk of facing fines.

The US regulator Federal Trade Council (FTC) is updating its guidelines on making environmental claims during 2022, in reaction to their growing popularity. Given the importance of the FTC in the US and the naked practicality of its present guide on green claims, last updated in 2012, the new guidelines should be a highlight to look out for this year, even for European regulators and businesses.

Carbon capture products like tree plantation are typically criticised for lack of permanence guarantee, ie who is to say those planted trees will not be cut down in the distant future? Wettbewerbszentrale (DE) disapproves of all climate neutral claims that are achieved through offsetting. In this regard, advertisers are held to impossible standards which hold back climate mitigation that carries added cost. Perhaps the ongoing efforts from the FTC and the EC can offer a balanced approach accepted by all which ensures that earnest carbon neutral efforts are honestly communicated so that consumer trust is safeguarded, while ensuring that best practice avoids causing an unintentional ban on real, practical contributions to GHG emission mitigation.

For further insight, please see our report, Sustainable Eating and the Environmental Cost of Food.

These Five Trends Will Redefine Global Snacks to 2027

The report examines inflation level and drivers globally and in the key countries. Global inflation is forecast to accelerate due to higher energy and commodity…