The rapidly growing and young population in sub-Saharan Africa continues to see the unlocking of its unmet potential, making the region an exciting opportunity for innovations, entrepreneurs and investors. Consumer market development is set to accelerate on the back of rising m-commerce and expanding access to finance, while intensifying bilateral trade is expected to increase regional integration. Sub-Saharan Africa has vast renewable energy reserves, which could enable decentralised energy network expansion solutions. Moreover, rising agricultural productivity, coupled with diminishing regional income disparities, should allow for sustained economic growth. The region will, however, continue to face several challenges, such as diminishing purchasing power amid rising inflationary pressures, inadequate access to electricity, and high dependency on commodities.

Africa is set to undergo a major demographic shift, with the continent’s working age population ratio expected to expand noticeably compared with the global economy. Sub-Saharan Africa will account for more than half of global population growth over the next two decades, with over 70% of this attributed to the rise in the working age population on the continent. Against a backdrop of limited employment opportunities, many young Africans are embracing entrepreneurship, innovation and digital transformation.

Working Age Population as a Percentage of Total Population (2010-2040)

Rising penetration of mobile internet and smartphones are driving digital transformation in sub-Saharan Africa, as only a relatively small share of households has access to a computer. Mobile internet penetration in sub-Saharan Africa almost doubled over the past five years, reaching 48% of the total population in 2021, while smartphone penetration rose to 77% of households in 2021. Lack of physical addresses is being overcome by unconventional delivery solutions, partnerships or establishing central pick-up points. For example, an on-demand grocery delivery company in South Africa, Zulzi, has incorporated “what3words” into its delivery process, while an online delivery service in Kenya, Mtaani, has established over 80 local pick-up points linked to Kenya’s mobile payment system M-PESA. 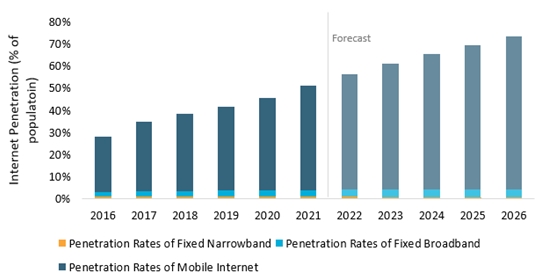 Local lending mobile platforms (such as QuickCheck in Nigeria) are emerging, meeting a crucial need for consumers and small businesses to access finance. In addition, major international companies are investing in local companies in the digital and technology sector in Africa, as several technology start-ups are mushrooming around major cities. In fact, Nigerian financial payments company Flutterwave has become the highest-valued start-up in Africa thanks to several rounds of successful funding, while Gro Intelligence, an AI-powered company in Kenya, raised the largest yet seen capital of USD85 million in Africa in 2021.

Intra-African trade is not uncommon, but mainly consists of minerals and low-value manufactured and processed goods. The key to improving bilateral trade will be export diversification and product sophistication. Cross-border services, particularly in the financial sector, mobile payments and digital shopping, are also set to benefit over the medium to long term. While there are still several hurdles to overcome in terms of intellectual property rights and competition policies, the African Continental Free Trade Area (AfCFTA) E-commerce Protocol aims to develop and promote local online platforms.

Recovery of economic growth is largely uneven across sub-Saharan Africa. The continent continues to face challenges in 2022 due to rising commodity prices, supply constraints amidst the war in Ukraine and reduced foreign financial flows. More diversified countries will benefit from recovering tourism as the effects of the pandemic dissipate, while the African Continental Free Trade Area is expected to boost intraregional trade. Resource-rich countries will benefit from rising commodity prices, but will also suffer sharp inflationary pressures, which will disproportionately impact vulnerable households. 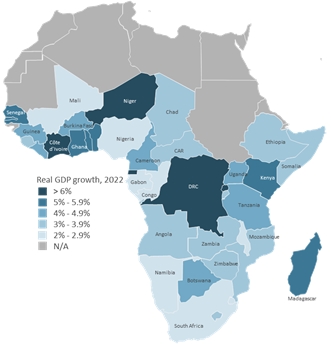 Due to low income levels, spending on food remains disproportionately high in sub-Saharan Africa compared with other emerging and developing countries. Geopolitical tensions, supply chain disruptions and increasing energy prices are leading to rising food inflation, further constraining consumers’ purchasing power. In 2021, countries heavily affected by food inflation were those with among the largest spending on food and non-alcoholic beverages, namely Ethiopia, Angola and Nigeria.

7. Economic and fiscal volatilities to prevail among resource-dependent countries

Several economies in sub-Saharan Africa are highly dependent on commodities for fiscal revenue and employment. Among regional countries with the largest mining and quarrying output, the sector’s role in the total GVA ranges from 6% in Tanzania to 39% in Angola, compared with only 1.3% among developed countries. While the current trend of rising commodity prices is fostering economic growth, a lack of economic diversification combined with periods of low commodity prices will continue to pose challenges, slowing economic growth and adding to fiscal deficits. 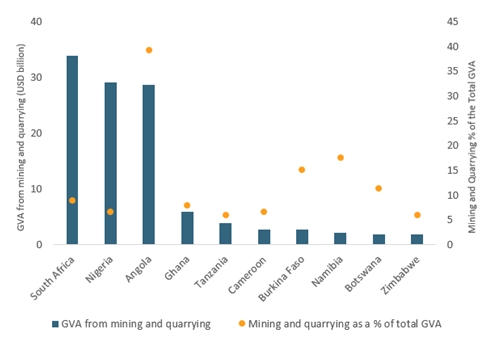 According to the International Energy Agency, renewable energy will constitute almost half of power generation growth within the region by 2040. While several countries generate almost all their electricity output from renewables, only 7% of total energy output comes from renewables in South Africa, the largest energy producer in the region. Electricity penetration remains low, as 47% of the population still lacked access to electricity in 2021. To tackle the issue, energy companies are eyeing solar mini-grid expansion in sub-Saharan Africa as a decentralised solution to reach remote areas, while the South African government is targeting 26% of the total energy mix to be generated from renewable sources by 2026.

The gap between urban and rural per capita income is shrinking in sub-Saharan Africa, as consumer income in rural areas is rising at a faster pace. Rural disposable income per capita in sub-Saharan Africa accounted for 41% of urban in 2016, with the figure increasing to 43% in 2021. Rural consumer income is expected to rise further, reaching 67% of urban per capita disposable income in 2040, illustrating diminishing regional disparities and growing expenditure potential among rural consumers. 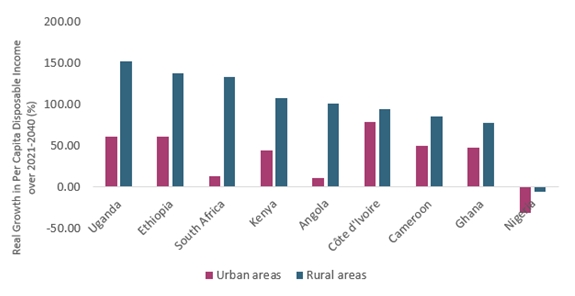 As of 2021, more than half of sub-Saharan Africa’s population was employed in agriculture, hunting, forestry or fishing, yet the sector generated less than one-fifth of the total gross value added. Agricultural productivity growth remains key to tackle food insecurity and raise consumer incomes, pushing governments to promote transformation and enhance smallholder farmer access to supply chains. Over the last five years, Ghana and Ethiopia both recorded 37% increases in agricultural productivity, owing to growing investment in agribusiness and mechanisation, aiming to increase agricultural output. 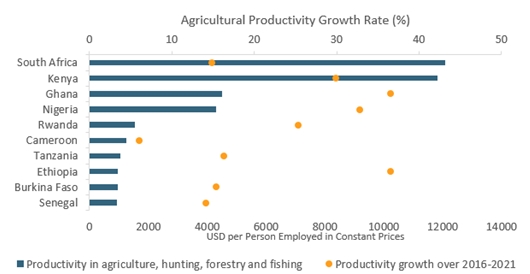