Other spirits is a category that encompasses much of what we call local spirits, composed of a plethora of products that vary widely depending on the country and region where they are located.

As the hype in spirits is usually concentrated in classic Western European drinks, this category is one of the most overlooked by consumers and companies, but considering volumes, it represents 44% of the total spirits consumed worldwide – with baiju, soju and cachaça being the most popular. 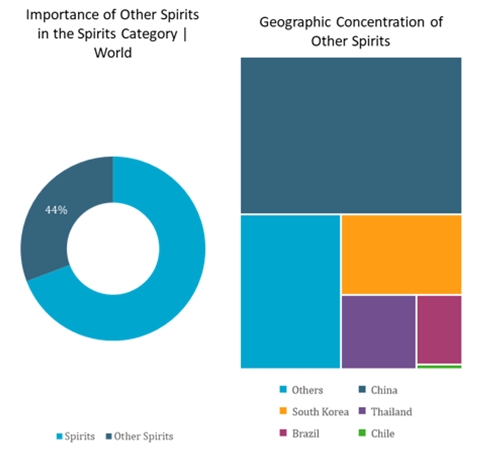 Of this 44%, five countries account for 77% of the volume consumed, each with its own speciality product, such as China with baijiu and South Korea with soju, which are both made from grains. Meanwhile, Thailand has sura khao or Thai whisky, made from rice, and Brazil has cachaça, made from sugarcane juice. However, the category covers over 80 different products in total.

Other spirits offers great insight in terms of understanding behaviours in different markets, especially in relevant and big consumer markets such as China, Brazil and South Korea. Their specificities and cultural ties to each country show unique occasions, channels and supply chains, that vary greatly for each product and country.

As it stands, other spirits has been losing space due to the globalisation and Westernisation trends that are dominating the alcoholic drinks industry, but it could surpass expectations and grow, as it appeals to affordability, especially in times of high inflation, such as those in which we are living.

It is also important to note the nostalgia aspect other spirits create, especially in times of turmoil, such as during periods of economic crisis, remaining relevant for both younger and older generations as consumers search for comfort from known products as they become more risk-averse.

What can we learn from the historic performance of these key products? One example is that marketing strategies relating to local cultures, unique occasions, channels, flavour preferences and supply chains can serve as stepping stones for companies’ expansion into these new markets.

In cachaça, the common drink caipirinha served as a starting point to introduce Brazilian consumers to vodka and sake, changing the base of the cocktail while maintaining the popular formula of macerated lemon, sugar and ice. Using the knowledge and popularity of the existing local spirit can help companies identify preferred flavours, cocktails, channels and even consumption occasions.

For example, the channel and consumption occasion for cachaça is closely tied with the on-trade, showcasing the social aspect of the drink, while baijiu is mostly bought off-trade, not necessarily for consumption at home, but to be given as a gift, serving as a status symbol. This association with status can serve as a lesson to be reproduced with other luxury beverages, such as Cognac and whisky. 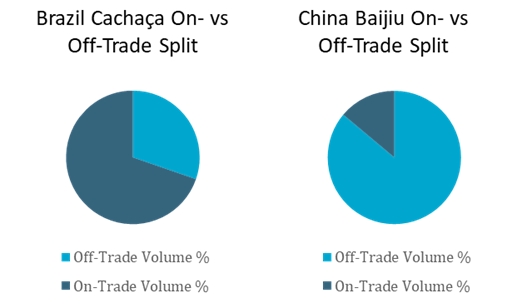 Soju, on the other hand, is consumed in both on- and off-trade channels, giving it the much-needed flexibility that its peers do not have. This creates a situation where companies can reprioritise channels and strategies to retain growth, which is what defined the category’s resilience during COVID-19. Understanding the channel and logistics behaviour for local spirits teaches companies the best practice of how to play in a market.

Availability is also important for spirits, as crisis impairs international logistics and creates price disparities. Local options can fill the vacuum, as they are available in their respective markets at competitive prices.

It is important to remember that other drinks were once other spirits: local, niche and culturally tied, but they broke the borders to become international phenomena, vodka and tequila being obvious examples. The recent surge  in sales of Cognac in China showcases how companies can leverage the opportunities of internationalisation and investment across borders with great success.

For further insight, read our briefing, Other Spirits in Developing Markets: Crisis as an Opportunity

Inflation Surge in Asia Pacific: How is the Soft Drinks Industry Responding?

Will the Metaverse Emerge as a Key Destination in Alcoholic Drinks’ Digital Journey?