The National Basketball Association (NBA) has commenced its 2021-2022 season, marking the league’s 75th anniversary. Ranked third in Euromonitor International’s 2021 Global League Index, the NBA is returning to a full schedule of 82 games this season, after the previous season was curtailed due to the Coronavirus (COVID-19) pandemic. As with all major US sports leagues, the NBA is banking on fans, with full attendances expected following the lifting of the capacity limitations that were imposed by the majority of teams last year.

While fans will be keen to see if the Milwaukee Bucks can successfully defend the Larry O'Brien Championship Trophy on the court, off the court the league will look to recoup lost revenues through an aggressive commercial strategy focused on sponsorship and broadcast innovation that will undoubtedly attract the attention of key stakeholders and the wider sports industry. 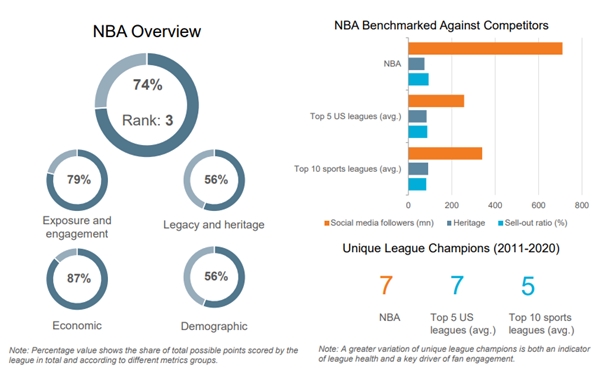 A good proportion of league franchises are in the process of renegotiating jersey patch sponsorship agreements this season. The new partner category was introduced in 2017 amid a few doubts over potential conflicts with individual player sponsorships, as well as commercialisation of the league. Nonetheless, the initiative has proven to be a financial success, which has allowed teams to book an additional USD5-10 million annually. Revenue from patch sponsorship was especially welcome during the pandemic, cushioning the financial pressures brought about by a shorter season schedule, within which many games were played without live fans in attendance.

The average value of NBA jersey patch sponsorship will almost certainly register tangible growth over the next year. In September 2021, the Brooklyn Nets reportedly broke the value record, signing a USD30 million per year deal with the financial platform Webull. The league’s recent decisions to increase the size of patches, and to allow franchises to sell international marketing rights themselves, will further drive jersey patch sponsorship value growth.

The NBA jersey patch sponsorship landscape is dominated by financial companies, both traditional banks and, increasingly, digital platforms and fintech players. The latter category is expected to remain the most prominent among new signings this year, mirroring the process on the other side of the Atlantic, where fintech and crypto companies are increasingly often involved in premium agreements, such as Chiliz-owned Socios.com becoming the shirt sponsor of Inter Milan from 2021. 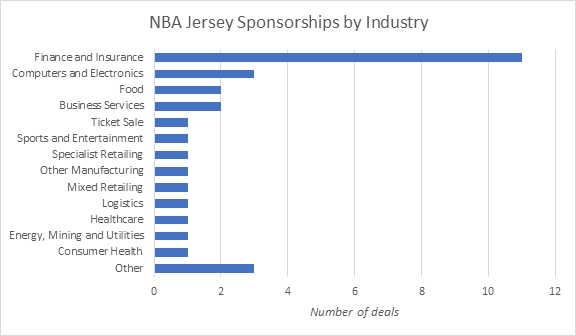 The NBA is expected to begin broadcasting rights negotiations, acutely aware that 2025 will see agreements with the current providers, ESPN and Turner Sports, expire. The current nine-year media rights deal is estimated at USD24 billion, but the league is setting its sights on generating significantly higher media revenues, no doubt having in mind the latest NFL broadcasting rights agreements, reportedly standing at USD100 billion. The structure of the new media package might also look considerably different compared with the current one. According to media sources, several major US betting companies are looking to bid for a betting-driven broadcast offering. The water was already tested for this last year, with ESPN’s betting-oriented telecast of a Brooklyn Nets and Philadelphia 76ers game, in addition to the traditional broadcast.

The NBA is already a pioneer in the US in terms of embracing betting partnerships. It was the first of the “Big 4” leagues to sign an agreement with the gambling giant MGM, the company becoming the league’s official gaming partner in 2018. The deal was then followed by other companies in the betting field, such as DraftKings and William Hill.

With a more flexible and innovative approach to sponsorship and a favourable media rights landscape, the NBA is looking strong in its pandemic recovery, and is well-positioned to fortify its position in Euromonitor International’s League Index as it seeks to drive both domestic and international revenues.

Millennials and Gen Z: A Challenge for Tennis Viewership?

Sports Trends to Watch in 2022

The Club Index 2021: How the Sports Industry is Emerging from the Pandemic

The Club Index was developed as a means to benchmark top sports clubs across key metrics, ensuring that stakeholders can contextualize performance and…

The League Index 2021: How the Sports Industry is Emerging From the Pandemic

The League Index was developed as a means to benchmark top flight domestic leagues across key metrics, ensuring that stakeholders can contextualize performance…

This report analyses the evolving synergies between Chinese and European football across key areas including sponsorship and fan engagement strategies.