Demand for alternatives to animal-based products has skyrocketed in recent years, with dairy and meat substitutes experiencing particularly strong growth. As consumers searched for these plant-based alternatives, retail value sales of meat and seafood substitutes in the US grew by 44% between 2019 and 2020, and by a further 8% between 2020 and 2021. 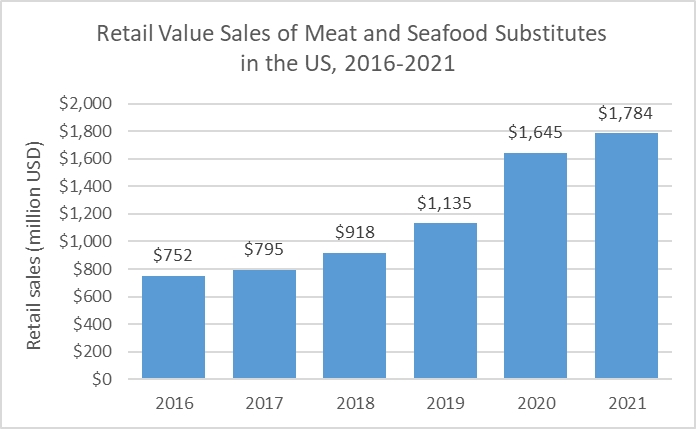 Seafood alternatives have commanded less consumer attention than meat and dairy substitutes as there has traditionally been less growth and innovation for this category. However, this is rapidly changing. Increasingly concerned with the environmental implications of their food, many consumers are looking to reduce their seafood intake. Consumers are becoming increasingly aware of the dangers of overfishing, including decreased fish populations, reduced biodiversity, and harm to habitats. According to the UN Food and Agriculture Organization, the global fish and seafood catch rose by 13% from 2010 to 2020, reaching 144 million tonnes. Continued growth at this rate would be unsustainable for maintaining fish populations and healthy habitats.

Although consumers often primarily consume meat and seafood alternatives for health purposes, environmental concerns are growing. In Euromonitor International’s Voice of the Consumer Lifestyle Survey, 67% of consumers globally indicated in 2021 that they have attempted to have a positive impact on the environment through their everyday actions, a 3% increase from 2019.

Alternatives are growing and innovating, but face challenges

Recognising this large growth potential, many companies have entered the seafood alternatives market. There are now over 80 players creating various types of seafood alternatives, a threefold increase from 2017. Major seafood suppliers have recognised this growth potential and have partnered with seafood substitute companies; for example, Bumble Bee Foods, a large producer of canned tuna and other fish, has invested in Gathered Foods, a producer of plant-based tuna and crab cakes.

There are several challenges in creating seafood alternatives to make them more acceptable to  consumers. Because many of these companies target meat and seafood consumers rather than just vegans and vegetarians, they need to develop products that sufficiently mimic the taste and texture of traditional seafood. This means they have to be processed, but as consumers often turn to alternatives for health reasons, they are wary of additives, chemicals and ingredients that they do not recognise.

Another looming challenge is consumer perception of traditional seafood, which is often viewed as a healthy alternative to meat. Therefore, it may be more difficult to convince consumers to purchase fish and seafood alternatives. Many producers consider cell-cultured seafood, which involves developing these alternatives from fish cells without killing the fish, to be the best way to gain consumer acceptance of seafood alternatives. Cell-cultured seafood provides a similar taste and texture to traditional seafood, but is produced in a more sustainable way, making it an environmentally-friendly alternative.

Alternatives come in a variety of types

Some players are developing seafood alternatives from vegetables and other plants. Founded in 2016, Ocean Hugger Foods has developed “farm-raised” sushi, including tuna made from tomatoes and eel made from eggplant. Several others are creating cell-cultured seafood, but these products are relatively early in the development stage. While many plant-based substitutes are already present, widespread availability of cell-cultured seafood is likely years away. Finless Foods, a US-based company, is currently working on developing bluefin tuna from cells. BlueNalu, which aims to be the global leader in cellular aquaculture, is working on several types of cell-cultured seafood. It has plans to launch in Europe between 2025 and 2030, which is the largest importer of seafood in the world and has the second highest volume sales globally with 5,764,000 tonnes sold in 2020. Several companies, including Shiok Meats and Zhenmeat, have launched in Asia, which has the highest volume sales of seafood worldwide.

Aqua Cultured Foods has developed a unique approach to creating these alternatives. It uses microbial fermentation, a process used to make familiar foods such as sauerkraut or kombucha, to create fillets that have the taste and texture of traditional seafood. The company is currently developing animal-free sea bass, cod, tuna, popcorn shrimp, and calamari. To address any concerns over the health claims of these alternatives, Aqua Cultured Foods is working to “position our products as replacements that are just as healthy if not healthier than traditional seafood,” stated co-founder, Brittany Chibe. The company claims that each serving will contain 18-20 gm of protein, and 10-12 gm of fibre, vitamin B12 and omega-3.

Launched in 2021, Aqua Cultured Foods anticipates that its first commercial products will be released in 2022. Although its products have not yet hit the market; they have received growing interest from retailers and foodservice establishments.

Consumer concerns over sustainability and biodiversity are driving many to seek out these products. As interest in alternative proteins grows, this space is expected to continue rapidly growing and evolving. Over USD100 million has been invested in seafood alternatives in the first half of 2021, a record-breaking level of funding. Although many companies are still in the development stage, seafood alternative producers are hopeful of multiple commercial launches in 2022 and 2023.