Uzbekistan’s location in Central Asia could be used to connect trade routes in Asia and Europe. Over the last few years, the country has been actively seeking to diversify its economy and boost trade. In April 2021 Uzbekistan joined the EU’s GSP+ (Generalised Scheme of Preferences) scheme, which will remove trade tariffs on two thirds of the product lines covered by GSP, and is expected to aid economic growth. Moreover, in March 2022 Uzbekistan signed a Preferential Trade Agreement (PTA) with Pakistan, which will lower the tariffs on the 34 goods covered. More importantly, this will give Uzbekistan access to Pakistan’s sea ports and strengthen trade routes in the south.

The total value of exports from Uzbekistan continues to grow, by almost 7% on average over the period 2016-2021, and was virtually unscathed by the global pandemic in 2020. In 2021, total exports from Uzbekistan stood at USD13.2 billion. However, total trade volumes remain relatively low in comparison with the size of the country’s economy. For example, per capita value of exports in Uzbekistan stood at USD699 in 2021, in comparison with USD3,211 in Kazakhstan or USD1,115 in Turkmenistan.

To some extent, exports from Uzbekistan were constrained by economic restrictions and heavy regulation, although the situation started to improve rapidly from 2018, when economic reforms and liberalisation accelerated. However, the country still relies heavily on exports of commodities and lower value-added goods that are very sensitive to price fluctuations. As of 2021, basic precious and non-ferrous metals (largely consisting of gold and copper exports) remained the largest export category and grew by 27%, although rising metal prices largely contributed to the increase. Spinning of textile fibres was the second largest export category, up by 22% in value terms in 2021. 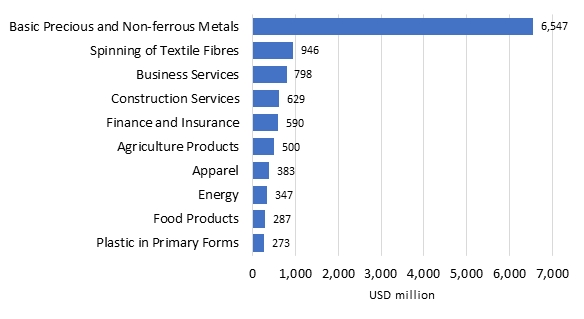 Despite high reliance on commodities, positive signs are also visible, and Uzbekistan managed to significantly increase exports of hi-tech and electronic goods. For example, exports of computers and office machinery grew from just USD0.2 million in 2016 to USD63 million in 2021; exports of electrical equipment for engines and vehicles soared from USD0.4 million to USD12.2 million over 2016-2021. In addition, Uzbekistan managed to maintain stable growth of exports of higher value-added services, such as business services and financial services. The country in general managed to benefit from economic reforms and relatively low operating and energy costs, which helped to boost production and trade in hi-tech goods and other higher-value added sectors. 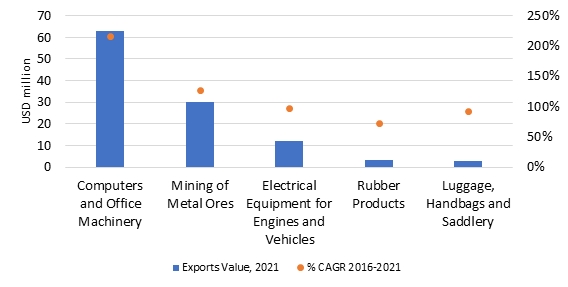 In terms of export partners, China, Russia and Turkey were the key export destinations in 2021, together accounting for 36% of total export value. Exports to EU countries represented just 2.7% of total exports in 2021. However, looking to the future, the GSP+ agreement could further boost Uzbekistan’s exports to the EU. Anticipated production localisation of machinery, automotive, hi-tech goods and medical equipment within the EU will lift the demand for various electronic subcomponents and metal parts. Uzbekistan can further build on its success and expand production of electronic goods and subcomponents thanks to lower operating costs. Moreover, the EU’s shift to a green economy and the need to diversify supplies of metals could further boost exports of metal products from Uzbekistan. However, the absence of sea access and the long physical distance to the main manufacturing hubs in the EU could be hurdles constraining some of the growth potential. Therefore, it will remain crucial to further develop water, land and rail connections to EU markets. 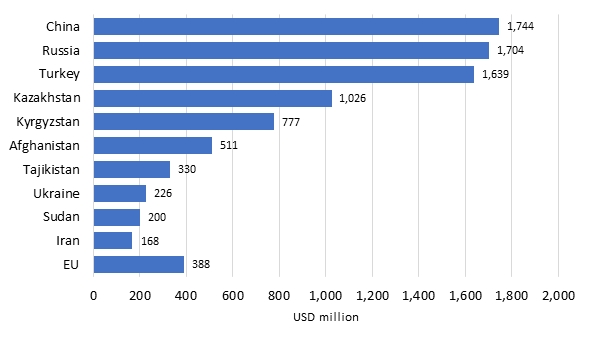 GSP+ agreement could change the structure of import partners

In terms of imported goods, total imports to Uzbekistan grew by 12% on average over the period 2016-2021. The total value of imports stood at USD20.8 billion in 2021, making Uzbekistan a net importer of goods and services. Uzbekistan mainly imports manufactured goods, metals and food products. Motor vehicles and parts, basic iron and steel and food products were the largest import categories in 2021. Moreover, machinery for production and industrial equipment was among the fastest-growing import categories over the period 2016-2021. This was in large part the outcome of economic reforms and the expanding manufacturing sector, in turn driving demand for the relevant machinery and similar capital goods. In terms of the main import partners, Russia, China, Kazakhstan and South Korea were the most important in 2021. 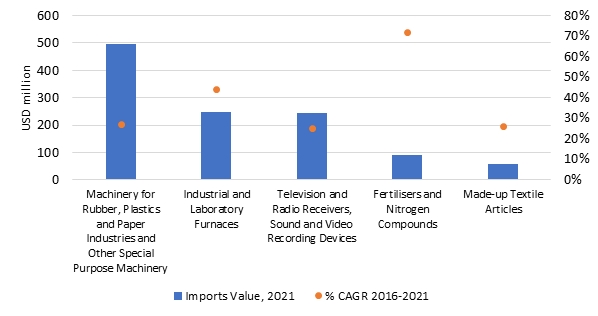 Looking to the future, no significant changes in import structure are anticipated. Uzbekistan’s economy is forecast to grow by 5.5% in real terms on average by 2025, in turn stimulating demand for machinery and construction materials. Energy imports could also increase, given the high volatility in global markets and consequently rising prices of energy materials. However, Uzbekistan has the potential to reduce imports of food products and agricultural goods. Investments in logistics and economic reforms aimed at boosting the production of higher-value food products could reduce Uzbekistan’s reliance on food imports. Anticipated changes in global supply chains and trade could also bring about changes in the import partners list. Over the last five years, Uzbekistan’s imports from EU countries increased significantly, and new trade agreements, as well as growing integration into the European supply network, could further boost imports from the EU. 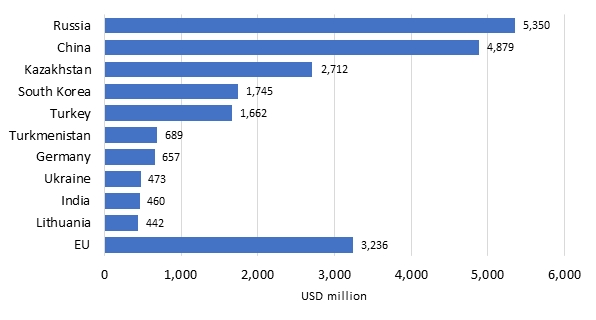 Global Economy 2023: What are the key recession risks?