Global birth rates have been declining over the last five years. Some experts expected that pandemic-related restrictions on social mobility would lead to higher birth rates. However, their predictions did not materialise in 2020, as global birth rates experienced the steepest fall witnessed since the 1970s.

Historically, economic shocks often lead to reduced birth rates. For example, the economic crisis of 2008 resulted in birth rates falling by 1% for three consecutive years. Meanwhile, in 2020, the birth rates plummeted by more than 3% over one year due to the combined effect of growing financial insecurity, mounting unemployment, restricted healthcare services and fatigued parents juggling work and family life, as school and day-care activities shifted online. Considering the average pregnancy lasts around nine months, the full impact of the pandemic was only felt in the last quarter of 2020. The higher-than-average decrease in birth rates is also expected to manifest over 2021-2022. 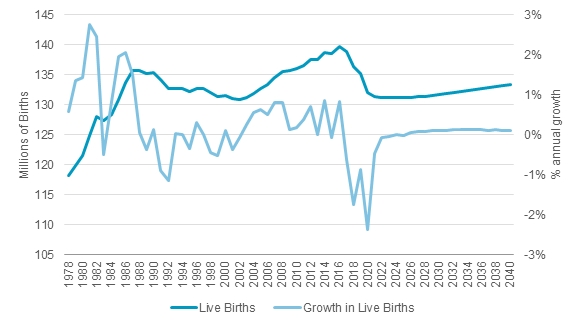 Asia Pacific and Latin America recorded a 5% decrease in babies born per thousand citizens, with China leading with a record drop of 19% in 2020, as a combined result of the pandemic and the long-term one-child policy. Despite reversing the one-child rule in 2016 allowing for two children per family in 2020, and a further extension to three children as part of its policy in 2021, China continues to suffer from the low-fertility trap and is expected to continue to do so over the forecast period.

Analysing historical data, it is evident that the pandemic has exacerbated a long-term structural trend. Urbanisation, better healthcare access, the growing number of women focusing on education and work, improving birth control awareness and increasing age at first childbirth are reasons behind this dynamic. Over 2000-2020, the global birth rate decreased by 21%, led by Latin America and Asia Pacific regions, where the number of babies per thousand capita shrank by one third. Although birth rates are expected to stabilise in Eastern Europe, other regions will likely see fewer babies being born over 2020-2040. By the end of the century, countries such as Japan, Italy, Spain, Portugal and South Korea could see their populations halve.

To encourage population growth, countries are trying to increase fertility rates to a replacement level of 2.1 children per female with fertility enhancement incentives. For example, France has been able to maintain one of the highest fertility rates in the developed world, due to its wide range of social policies including subsidised childcare and a generous benefits system. Meanwhile, Scandinavian countries are able to maintain relatively impressive fertility rates due to having some of the highest female and maternal employment rates in the EU alongside wide availability of childcare services. 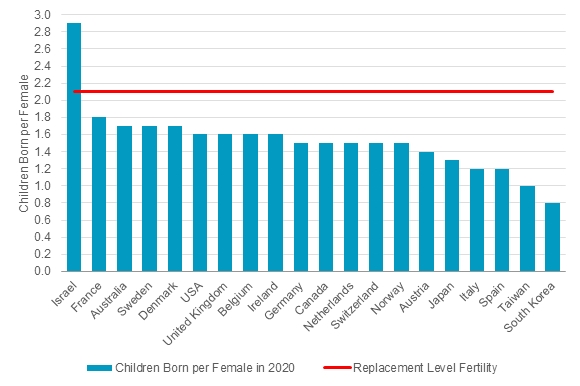 Although decreasing birth rates are highly correlated with such positive trends as improving maternity healthcare and further female education, such dynamics are not conducive to economic development. Decreasing birth rates mean lower tax collections in the future, which combined with high retirement rates and associated social security benefits, will result in state budget imbalances. Moreover, declining birth rates in many countries have already led to workforce shortages.

Many countries are taking active measures to mitigate these shortcomings by promoting immigration. Canada, for instance, is set to welcome more than 400,000 new permanent residents in 2021, which is more than 1% of its population. However, global migration is a zero-sum game - while some countries enjoy high immigration rates, others are bound to suffer from emigration.

Companies are also having to adjust to this change. Whilst a decade ago, candidates faced fierce competition for positions, companies are now competing for candidates to fill their vacancies. Competition is also shifting to another level, as in addition to money, candidates are searching for holistically attractive workplaces, which offer remote work possibilities, appealing culture fit and numerous benefits. From tuition compensation offered by Amazon to bonuses for obtaining a good night’s rest by Whoop – candidates can choose what best fits their values and lifestyles. Finally, as birth rates continue to decline and populations age, companies face higher competition for consumers, leading to shifting and adjusting business models away from family-orientated goods to senior-focused ones.

Home as a Hub Can Transform Business Models

Inflation Intensified: What Can We Expect from the Australian Consumer?

The briefing examines how the top global healthcare trends such as shifting consumer health behaviours, personalisation, the transformation of medicinal…