After three and a half years of uncertainty following the Brexit referendum in 2016, and three extensions to Article 50, the Conservative Party win in the United Kingdom’s (UK) snap election in December 2019 (with a majority of 80) will put an end to any doubt regarding whether or not the UK will leave the European Union (EU). Prime Minister (PM) Boris Johnson was given a mandate to get the European Union (Withdrawal Agreement) bill pushed through parliament, enabling the UK to leave the EU in January 2020. Additionally, the worst performance of the Labour Party since 1935 resulted in Jeremy Corbyn confirming he would not lead the party into another election.

Although businesses and consumers will have some respite in 2020 with a business as usual transition period, there will still be uncertainty about the nature of any deal regarding future relations with the EU, while a No-Deal Brexit at the end of the transition period in December 2020 is not off the table, especially since the Withdrawal Agreement was amended by the new government to prohibit extending the transition. During the election campaign, PM Johnson made it clear that he was seeking a Free Trade Agreement (FTA) with limited regulatory alignment to be agreed by the end of 2020.

In light of these developments, Euromonitor International has revised the probabilities of the Brexit scenarios, with the baseline FTA increasing to 65.0% while also raising the probability of our No-Deal scenarios up to 35.0%.

No-Deal Brexit has not been ruled out

Did you know, in a No-Deal Brexit scenario:

Economy: The UK’s annual real GDP growth rate will decline to 0.4% in a No-Deal Brexit in 2021, but the economy would contract by 3.5% in a Disorderly No-Deal scenario.

Consumers: The bottom segment in the UK will expand its share in total consumer expenditure to 18.0% in 2023, compared to the share of 16.9% expected in the baseline scenario.

Cities: Bristol’s creative, tech and aerospace would face a hit due to immigration restrictions that would put local businesses in limbo. Some of the major companies based in the region include Airbus, Rolls-Royce and Astra-Zeneca, which are dependent on EU workers filling skilled vacancies.

Industries: The UK’s coffee industry faces price rises and barista shortages. The exponential growth of coffee shops in the UK could lead to a shortage of baristas across the nation, an industry that often rely on overseas workers. 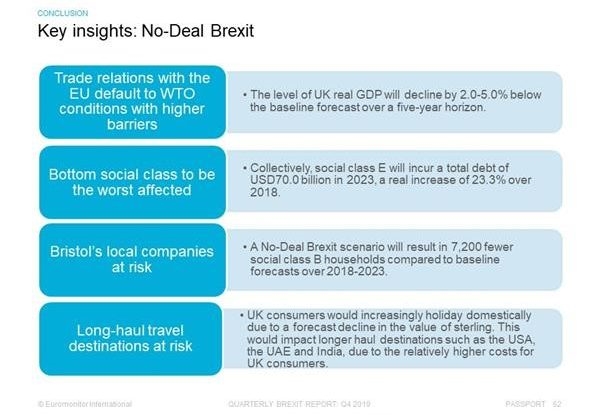 Find out more in our Quarterly Brexit Report for Q4 2019.

Euromonitor International’s Brexit Scenarios Tool helps clients to understand the impact of different scenarios on our baseline forecasts for the UK economy, industries and consumers. It offers a range of outcomes, providing the tools to stress-test strategy, plan ahead and remain profitable in these challenging times.

Head of Content Strategy, Economies and Consumers, media.eghbal@euromonitor.com or connect with her on LinkedIn.