The original Brexit deadline of 29 March 2019, two years after the triggering of Article 50, has been and gone, with the U.K. still a member of the European Union (EU), three years after the referendum that ended in a vote to leave. In addition, the country has been plunged into new peaks of uncertainty as the resignation of Theresa May in June 2019 has effectively put Brexit on hold until the U.K. has a new Prime Minister.

A parliamentary summer recess, beginning on 25 July, immediately after the Prime Minister’s appointment, and the Party Conference season in September-October, offer very little time for moving the Brexit process forward once a new leader of the Conservative Party has been elected. Following another extension of Article 50 in April 2019, the new Brexit deadline is 31 October 2019.

We have updated our Brexit scenarios in light of the renewed uncertainty until a new Prime Minister is in place. All Brexit scenarios remain on the table, but we have revised the probabilities of a No-Deal Brexit upwards.

The first half of 2019 saw one disaster after another for the ruling Conservative Party in the lead-up to Theresa May’s resignation: Her Brexit deal was rejected by the House of Commons three times, a one-million-strong anti-Brexit march in London in March 2019, the second extension of Article 50, the collapse of British Steel (partly blamed on Brexit), failed cross-party talks with Labour and a disastrous performance by the Conservatives in the European Parliamentary election, which the U.K. would not have been taking part in had it left the EU on time.

The newly formed Brexit Party came out on top, taking 31% of the U.K. vote, but the results were also bad for Labour, as the Liberal Democrats came second, after showing a clear pro-remain stance on Brexit.

The new Prime Minister’s standpoint on Brexit will determine the U.K.’s economic future. With the leadership contest having whittled down contenders to Boris Johnson vs Jeremy Hunt, both candidates offer a harder line on Brexit than their predecessor, especially on leaving without a deal.

It is unclear whether the EU would be willing to grant the U.K. yet another Brexit extension, with France being particularly vocal on giving the U.K. too many chances. However, the possibility of a pro-No-Deal Prime Minister raises the likelihood of a general election as the majority of Parliament still opposes a No-Deal outcome.

Euromonitor International forecasts that in a No-Deal Brexit scenario in Q4 2019, U.K. real GDP growth would drop to just 0.1% in 2020 and unemployment would reach 6.0% by 2023. In a Disorderly No-Deal scenario, where disruptions of trade are more severe and long-lasting, real GDP growth would contract by 3.4% in 2020, the worst economic performance since the Global Financial Crisis of 2008-2009, and unemployment would reach 7.1% in 2022.

Did you know: In a No-Deal Brexit scenario

Consumers: Demand for budget goods and services will remain high. Over a third (35.1%) of U.K. households will still belong to the bottom segment in 2023.

Cities: Sheffield has benefited from the European Regional Development Fund. A No-Deal Brexit is set to result in 10,200 more D Segment households in Sheffield compared to baseline forecasts over 2018-2023, placing more households in lower-income brackets.

Industries: Budget-conscious consumers in a No-Deal Brexit scenario will seek bigger pack sizes in beauty and personal care. Consumers will be on the lookout in bath and shower for sizes between 300ml and 500ml, often perceived as better value for money. 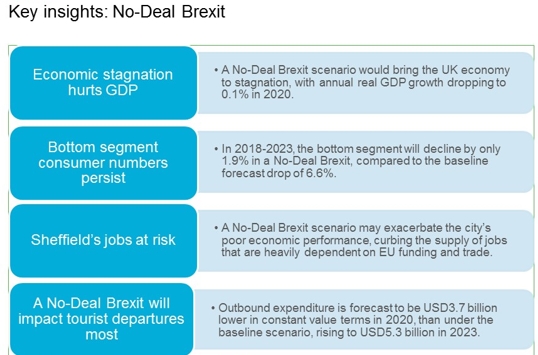 Find out more in our Quarterly Brexit Report for Q2 2019.

Euromonitor International’s Brexit Scenarios Tool helps clients to understand the impact of different scenarios on our baseline forecasts for the U.K. economy, industries and consumers. It offers a range of outcomes, providing the tools to stress-test strategy, plan ahead and remain profitable in these challenging times.