A new sphere of global influence is evolving, with emerging and developing urban Asia anticipated to become the hotspot for consumption thanks to economic growth, rising incomes, surging consumption and growing digitalisation. Beijing, Shanghai, Manila and Bangalore are just a few of the metropolises anticipated to further challenge the status quo of established cities in the developed world, benefiting from a rapidly growing middle class. This is expected to make the region a key battleground for businesses, which will need to develop more intricate, effective and personalised strategies that target Asia’s fast emerging middle class consumers. However, differences in economic development will bring unique challenges for each city, and this will be a crucial point for businesses to address as part of their future growth strategies in the region’s urban areas.

Emerging and developing urban Asia at the forefront of global growth 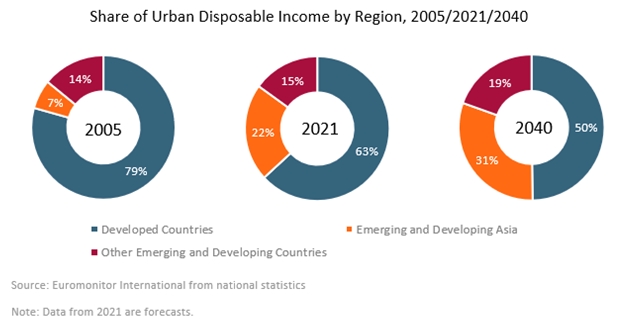 Emerging and developing markets across Asia have powered the global economy over the past few decades, with China being the linchpin of the region’s rise. This is expected to continue in the future, with Indian, Indonesian and Bangladeshi urban areas increasingly contributing to the region’s affluence. By 2040, nearly a third of the world’s urban disposable income is expected to originate in emerging and developing Asia and will further erode the dominance of developed regions, with cities such as London, New York and Paris no longer the predominant consumer hubs of 20-30 years earlier.

The ascent of cities in emerging and developing Asia is being compounded by two factors – population and productivity growth – with both adding enormous wealth and spending prospects for the region. Between 2021 and 2040, Manila is projected to add more in total disposable income (constant prices) than Chicago, Seoul or London, while becoming the second largest in the world by the latter year. Growth in Chinese tier 1 cities such as Beijing and Shanghai will largely be driven by productivity improvements, as population growth is expected to wane through to 2040 due to demographic challenges, although smaller tier 2 and tier 3 cities are anticipated to maintain a robust pace of growth. This includes cities such as Nanjing, Dongguan and Hangzhou, which are forecast to boast larger consumer markets based on disposable income (constant prices) than Barcelona, Frankfurt or Vancouver by 2040. 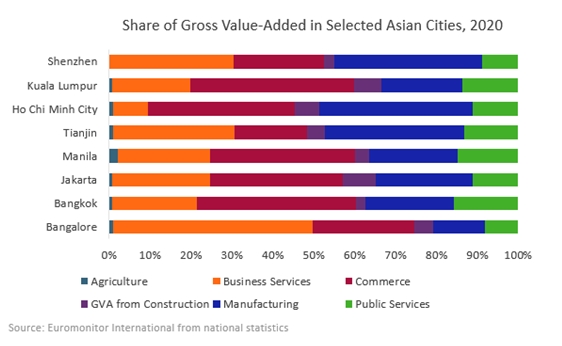 A defining moment for cities in emerging and developing Asia has been their economic shift to more productive sectors of the economy, focusing on tertiary and quaternary industries and transitioning away from agriculture and low-level manufacturing. For example, between 2005 and 2020, Bangalore saw a 19 percentage point rise in the share of Gross Value Added (GVA) achieved from business services thanks to the city’s rise as an IT and tech centre in the country, while Shanghai’s business services industry grew to account for 39% of its GVA in 2020.

This has been met with improving educational attainment, as higher incomes have allowed larger proportions of populations to seek secondary and higher education. For instance, in 2005, just 26% of Beijing’s population aged 15 and over had a higher education degree, compared with 41% in 2020. This has helped the region deliver a thriving entrepreneurial scene and put Asia on the map for start-ups. According to the advisory and research firm Startup Genome, five cities in emerging and developing Asia were among the top 30 in delivering the best start-up ecosystems in 2021 – this includes Bangalore, which has accounted for half of all Indian start-ups that have gone on to become unicorns (privately held start-ups valued at over USD1 billion). 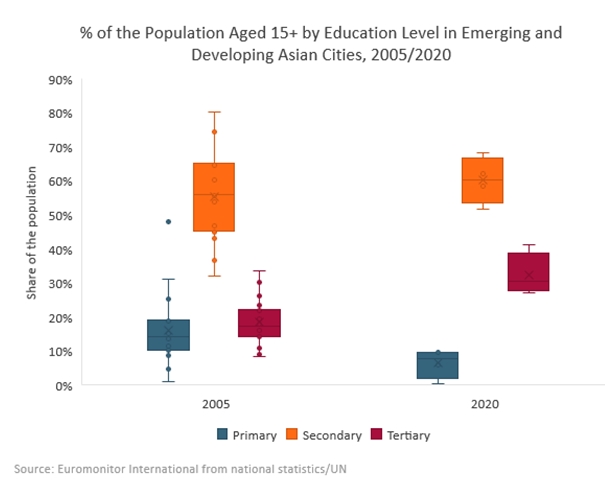 The shift to higher value-added economic sectors has elevated consumers’ incomes in cities in emerging and developing Asia and opened up a new and rapidly growing middle class that is expected to deliver consumption levels on a par with some developed cities in the medium to long term. For instance, by 2040, Beijing and Shanghai are expected to overtake established European cities such as Berlin, Marseille and Manchester based on disposable income per capita, in real terms, while Mumbai and Manila are anticipated to boast more households earning over USD55,000 (constant prices) in 2040 compared with Madrid, Toronto, Melbourne or Milan.

Rising purchasing power will transform consumption patterns, with more expenditure expected on discretionary goods and services. By 2040, the average inhabitant in Beijing is forecast to record an eight-fold rise in spending on household goods and services when compared with 2005 spending levels (constant prices), and the average Delhi inhabitant in 2040 is projected to spend over 10 times more on clothing and footwear compared with 2005 (constant prices). Such growth expectations are going unmissed by corporates such as multinational retailers, mobility firms and fmcg companies, which are seeking to tap into new growth opportunities and diversify away from stagnating developed cities.

In tandem, the surge in e-commerce activity, fostered by rising smartphone and internet penetration rates, will further deliver new business opportunities in cities in emerging and developing Asia. Some of the region’s high-flyers will include Manila, Jakarta and Karachi, with the trio forecast to add 17 million, 13.5 million and 12 million internet users, respectively, over 2021-2040, making them among the 10 biggest growth markets for e-commerce. The shift to online has been strongly accelerated by the COVID-19 pandemic, as more people have turned away from bricks-and-mortar shops to major online marketplaces such as Tmall, Lazada and Shopee, which are profiting from the region’s rapid urbanisation and middle class uptick. 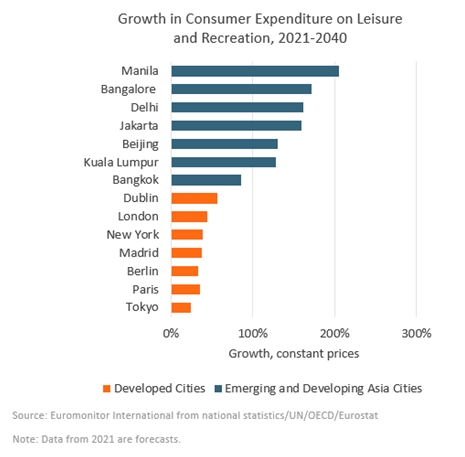 Cities in emerging and developing Asia are powering the global economy. Building exposure in these swiftly growing markets is already a potent strategic move, and this is only expected to strengthen through to 2040, when the region will have a substantial number of cities with purchasing power higher than that of established major metropolitan areas in the developed world.

However, not all cities are at the same stage of development in emerging and developing Asia, meaning different challenges for different types of cities. Major Chinese cities have attained standards of living almost comparable to those in developed economies, but will face population ageing issues; meanwhile, other cities in Pakistan, Bangladesh, Indonesia and India are still finding their feet, with infrastructure, poverty, pollution and climate change issues hindering their path. For instance, Jakarta is currently facing a geological issue that is resulting in parts of the city sinking due to groundwater depletion, raising the possibility of coastal flooding, while Mumbai, Manila, Delhi and Bangalore are some of the most traffic gridlocked cities on earth. Succeeding municipal and national governments will be required to implement the right mix of policies that strengthen the urban environment and address specific challenges which may impede future economic ambitions. It will be important for businesses to consider such differences as part of a holistic strategy that recognises risks and barriers but also rewards pioneer instincts.

For further insight and analysis, please take a look at our report, Megatrends: Shifting Market Frontiers - Cities of the Future