Cities in emerging and developing countries have been the engines of economic growth over the last two decades. In turn, rising disposable incomes have yielded an increased appetite for consumption, attracting the attention of investors and multinationals. By 2040, some cities in developing and emerging markets are projected to be almost on a par with cities in developed economies, based on per capita incomes. Nonetheless, high debt levels, rising inflation and other risks could upend economic growth and slow income expansion in emerging and developing cities.

A shift in economic and industrial policy towards service sector development and high value-added manufacturing has been a crucial factor in pushing economic growth in emerging and developing cities. For example, Shanghai has seen its share of gross value-added (value of output less the value of intermediate consumption) from business services (activities in finance, insurance, technology, etc.) rise from 11% in 2005 to 18% in 2021, and this has helped push up the average productivity per employee by 187% in the same period (constant terms).

Greater productivity has, in turn, promoted higher rates of economic growth. Over 2005-2021, real GDP in developed and emerging markets surged by 115%, dwarfing the 25% growth in developed economies. This trend is expected to continue, with real GDP rising by 105% in real terms over 2021-2040 in emerging and developing countries. 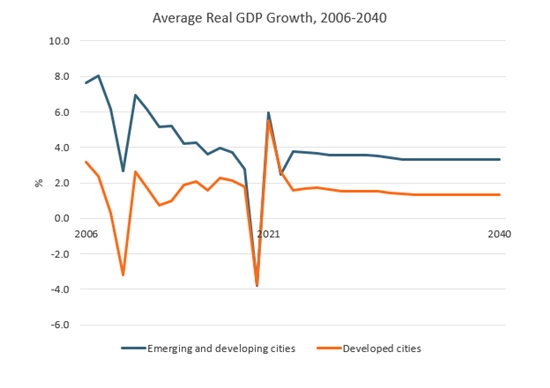 The productivity gains achieved have helped raise incomes. While the average inhabitant in emerging and developing countries boasted per capita income of just USD1,882 in 2005, by 2021 this had nearly doubled to USD3,638, and is projected to reach USD6,224 by 2040, in constant value terms.

Higher incomes have largely been concentrated in cities thanks to the greater concentration of better-paid jobs, and this has been a primary factor influencing urbanisation. In China and India, urban household disposable incomes were twice as high as rural incomes in 2021.

Unsurprisingly, consumer purchasing power based on disposable income per household in some emerging and developing cities is expected to be almost on a par with advanced economies amidst this rapid growth. For example, Beijing’s projected average disposable income of USD60,740 will be almost level with Tokyo (USD60,900), Barcelona (USD61,322) and Lisbon (USD61,539) by 2040.

Commercial strategies to shift focus towards emerging and developing cities

With higher purchasing power, consumers in emerging and developing markets are yielding a greater appetite for goods and services. This is influencing the commercial strategies of businesses, as they rejig their focus to growth markets and away from stagnating advanced economies. For example, Nike almost doubled its brand share in footwear in Brazil over 2012-2021, to reach 10.1%, while H&M saw a seven-fold rise in its share in apparel in Mexico.

Indeed, many of the commercial strategies of fmcg players and other retail businesses will focus on urban areas, which are expected to house the growing middle class. For example, Sao Paulo accounted for 25% of national growth in households earning more than USD25,000 from 2005 to 2021, while in Jakarta this reached 44%.

Moreover, adidas has sought to build brand engagement through increased investment in key megacities (cities with 10 million people or more) as part of its growth strategy up to 2025. It seeks to raise the number of key portfolio cities to 12, by adding Mexico City, Berlin, Moscow, Dubai, Beijing and Seoul to the existing line-up of Tokyo, Shanghai, Paris, London, New York and Los Angeles.

Risks to growth in emerging and developing cities

Depite the encouraging projections for emerging and developing cities, several risks could slow their progress in catching-up with advanced economies. Debt is one of the biggest challenges facing national economies, as it increases the risk arising from financial shocks. For example, in Brazil, public debt as a percentage of GDP rose from 62% in 2010 to 93% by 2021. Greater fiscal discipline will be needed to prevent overly loose economic policy.

Inflation is also a major worry. In 2022, 18 of the 20 economies (out of 103 countries) with the highest inflation rates will be in emerging and developing markets. This is expected to curb the purchasing power of consumers, who will direct more of their income to non-discretionary goods and services.

The high growth opportunities in emerging and developing cities are attractive, and will help diversify away from advanced economies. However, this will need to be weighed up against the challenges of operating in high-risk business environments. In the long term, productivity growth will slow down as emerging markets mature, leading to slower real GDP growth.