During January 2021, the blockade imposed by United Arab Emirates, Saudi Arabia, Egypt and Bahrain on Qatar (due to suspicions that the country had aligned itself with parties that were a threat to the region) came to an end, with all parties re-establishing relations. However, the trade relations are not expected to return to pre-blockade volumes for a while because of existing trade deals that Qatar has with other countries that have filled the gap and their own increase in local production.

Moreover, with the disruption to global supply chains due to Coronavirus (COVID-19), these partnerships and foray into local production have allowed the country to remain resilient during the crisis. Realistically, the blockade countries would have to add real value and reduce Qatar’s costs in order to be reconsidered a viable option for trade.

As a result of this blockade, Qatar established trade deals with other neighbouring countries, mainly India, Pakistan, Iran and Turkey. In addition, it took advantage of the situation and started producing many goods locally, helping the country become less reliant on its Arab counterparts. This is very apparent when we look at government revenue from exports. According to Euromonitor, a year after the blockade was announced, exports jumped 25%. Ultimately, the blockade actually helped the Qatari economy grow and prosper, with the country registering positive GDP growth in 2018 and 2019. 2020 was a challenging year for Qatar, as with the rest of the world, due to COVID-19, as well as the drop in oil and gas prices.

As mentioned, Qatar made the most out of the blockade and ramped up local production of goods. This allowed the country to become more self-sufficient. This, for example, is very noticeable in the dairy industry. Dairy was once dominated by Saudi Arabian companies. The two biggest companies from the Kingdom, as demonstrated below, controlled more than a third of the market in the years prior to the blockade, with key brands such as AlMarai and Danone. Since then, Qatari-based dairy companies have filled the gap. Today, the two biggest companies are from Qatar and control over 40% of the market, which includes the brands Baladna and Dandy. 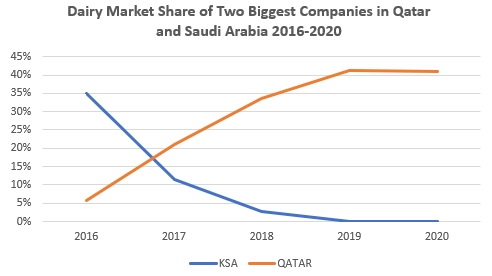 Travel and tourism to benefit from the end of the blockade

Initially, most industries will not be massively affected by these newly amended relations, with the biggest winner being travel and tourism. Qatari travellers will be able to enjoy visiting the United Arab Emirates and Egypt, while also fulfilling religious requirements in Saudi Arabia. Similarly, these countries will be able to visit Qatar and enjoy its exciting line-up of upcoming sporting events, which include football, tennis and beach volleyball. The biggest event to take place soon is the 2022 FIFA World Cup. Euromonitor expects that these events will cause leisure air arrivals to more than double by 2025, compared to 2021.

Without a doubt, this healthy growth goes hand in hand with Qatar’s strong vaccination campaign; as of June 2021, over 40% of the country’s population is fully vaccinated. Similarly, neighbouring countries have also taken big strides towards fully vaccinating their populations. This will help boost Qatar’s travel figures and vice versa.

Another industry worth keeping an eye on is consumer finance. In particular, the United Arab Emirates is becoming a hub for financial technology innovation. These innovations are seeing card and mobile payments skyrocketing.  While Emirati-cash transactions are forecast to drop by over 10% annually for the next five years, according to Euromonitor data, it is expected that some of the Emirates-based companies will begin expanding into Qatar, or have similar ideas promoted by Qatari companies themselves.

Relationships between Qatar and the former blockade countries are not expected to rebound immediately, as many factors, such as COVID-19 and localisation, still stand in the way. Once the pandemic eases and supply chains return to more normal activity, we can expect to see greater interactions between Qatar and its neighbours. However, for now, the countries need to rebuild relationships and re-evaluate synergies. On the other hand, this presents opportunities for countries that Qatar is collaborating with, such as Turkey and Iran, to exploit the rocky relationships in the region to expand and grow their brands in Qatar further.

As Foodservice Recovers, What Can Food Retail Do?