In 2022, Euromonitor researched the Japanese cannabis market for the first time. While only in its initial stages, there are high growth opportunities, particularly among health-conscious Japanese consumers, given inherent demand for better sleep and pain relief. The market has quadrupled in the space of a few years, from JPY4 billion in 2019 to JPY17 billion in 2022. However, due to legal uncertainties and grey zones, the market lacks the investment and active presence of larger, local companies, limiting consumer awareness and understanding. Regulation change, expected in 2023, is set to change this.

Cultural aversion to cannabis in Japan still an obstacle

At present, consumer understanding is limited, with most people likely to conflate CBD with illegal cannabis. Japan has a strict social opinion of zero tolerance to cannabis, and illicit cannabis use amongst adults is low. Around 0.2% of the Japanese population (15-64 years old) is thought to consume cannabis illegally (at least once a year in frequency). This is far lower than illicit cannabis consumption in most other countries, especially when compared to many Western nations recording over 10%.

The Japanese police and the Ministry of Health, Labour and Welfare (MHLW) treat cannabis in the same way as other “hard” drugs, such as methamphetamine, cocaine and heroin. Subsequently, Japanese society tends to view cannabis as harmful and anti-social; it’s a significant media scandal if, for example, celebrities are arrested for violation of the Cannabis Control Act. But prospective legislative reform would be an essential first step in broadening societal acceptance for CBD.

Cannabis became a prohibited substance in Japan, following the adoption of the Cannabis Control Act in 1948, and there have been no major changes to this legislation. However, cannabis regulation reviews in other countries have contributed to momentum for regulatory changes in Japan. In 2021, the MHLW established an expert committee to review the Cannabis Control Act, and it is expected revisions will be proposed in a bill to be submitted in 2023. This will most likely allow for the use of medical cannabis.

Another key point is the possibility of changing categorisation from “part-based” (regulation determined by the parts of the cannabis plant) to “ingredient-based” (regulation by cannabinoid content). The change will make only THC subject to regulation. Currently, products containing CBD, which is extracted and manufactured from only the mature stems and seeds of the cannabis plant, do not fall under the legal category of cannabis, which is regulated by law.

However, cannabis production is highly regulated under licensing and it is virtually impossible to extract or refine CBD from cannabis plants grown in Japan. When importing CBD products, the importer needs to prove that it is THC-free as well as being extracted from grown stem and seeds only. This is a drag on imports because in other countries, regulations are generally ingredient-based, focussed on THC content rather than the parts of cannabis plants, making it difficult for manufacturers to prove that they comply with Japan’s unique part-based regulations. Changing the regulation from part-based to ingredient-based, would immediately widen the potential gateway for CBD imports and present new market opportunities.

While Japan is still at the stage where only early adopters have experience of using CBD, there is a notable difference in the popular formats compared to the US, the world’s largest CBD market.

The popularity of vapour in Japan is attributable to Japan's e-cigarette regulations, where nicotine-containing vapes are banned by law. CBD-containing liquids provide the sensation of vapour inhalation without the need to consume harmful ingredients such as nicotine and tar, which has further supported their usage. 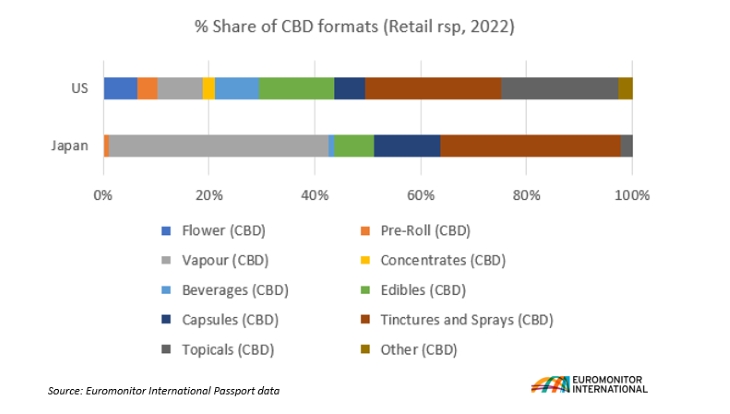 Once legislation is amended, large companies from industries as diverse as food, beverages, supplements and cosmetics are expected to enter the market. For CBD beginners, more familiar formats such as beverages and edibles may be easier to try, as Japanese consumers are accustomed to functional food and beverages. Topicals are also good entry products, as consumers can easily try them at retail shops, and Japan has a massive skin care market. These products can be positioned on their strength as aids to better sleep and for pain relief, which can be expected to directly appeal to health-conscious consumers in Japan, a nation renowned for the longevity of its people.

Although increased consumer awareness and understanding are essential, changes to legislation that allow for product launches from large, established and familiar domestic manufacturers are expected to accelerate wider acceptance; the underlying foundation for high growth projections. Moreover, legalising medical cannabis may also play a role in improving the image of legal cannabis, as it has in other markets.

For further insight and full market data, see the report Cannabis in Japan.

This briefing covers the main developments impacting the cannabis industry in the last quarter of 2022, including regulatory updates in all regions,…