Global middle class consumers are increasingly shifting away from conspicuous and wasteful consumption towards more selective and conscious spending, in a megatrend we at Euromonitor International have called the Middle Class Reset. This shift in the middle class mindset and their consumption choices will be long term and will contribute to shaping the global consumer market of the future.

Drivers of the shift away from overconsumption

Five key factors are at play to drive, and accelerate, this shift. These are:

How are consumers shifting away from conspicuous consumption?

The Middle Class Reset manifests itself in six key trends: 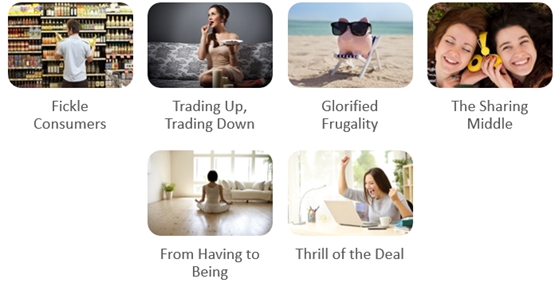 As a megatrend, the Middle Class Reset started off in developed markets, where the squeezed middle class after the 2008-2009 financial crisis changed their consumption habits in an effort to optimise their limited resources. However, in emerging and developing economies, even as the middle class continues to expand and enjoy rising incomes, middle class consumers are also seen to increasingly shift their consumption behaviour away from conspicuous consumption, which was previously considered a marker of success. Increasingly, businesses in emerging and developing markets are responding to trends pertaining to the Middle Class Reset: