In 2022, global disposable incomes and expenditure per household are both expected to grow by 2.6%. The fastest growth in real terms will be observed in Saudi Arabia, where income and expenditure will rally by nearly 16% over the year. In contrast, income per household will plummet by 5% (and spending by 6%) in Egypt. Although growth rates differ across the countries, the top three trends affect income and expenditure patterns worldwide. Increasing consumer frugality due to the rising cost-of-living crisis, the unstoppable progress of emerging markets as spending hubs, and the growing importance of more affluent consumers aged 65+ years are the major global trends to watch in the short to medium term.

Living costs were on the rise in 2021, primarily owing to increasing global energy prices, shortages of materials and supply chain disruptions, in addition to rising shipping costs and heated real estate markets across most global regions. Overall, the global inflation level stood at 4.9% in 2021 and is projected to reach 8.3% in 2022, limiting discretionary spending power, especially for lower-income consumers. Over 2021, the cost-of-living index rose by an average of 5% across the 103 largest global markets, with the most notable increases being registered in the Middle East and Africa, and Eastern Europe. 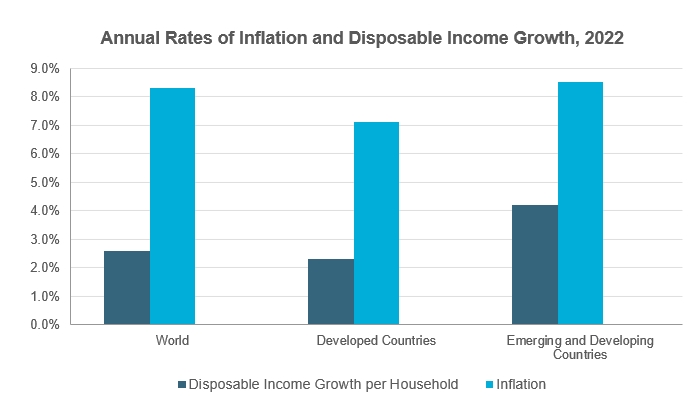 While consumers are looking to spend less money overall, businesses that can adapt to changing consumer mentality still have the potential to retain their loyalty. Affordability is an essential factor when making purchasing decisions with tight finances, leading consumers to shop around and search for bargains and discounts. Offering a more comprehensive range of additional benefits is another effective strategy. In addition to growing frugality, players need to cater for other needs that consumers perceive as valuable, such as sustainability, convenience, durability, and brand image.

Revisiting the potential of emerging markets

In 2021, consumer expenditure in Asia Pacific accounted for 29% of the total global consumer market, with this share set to reach 38% by 2040 at constant 2021 prices. In value terms, the regional consumer market is set to amount to USD30.6 trillion by 2040. Given their large populations, China and India will continue to dominate overall regional consumer spending. Meanwhile, Bangladesh, Cambodia and the Philippines are set to be the fastest-growing Asian countries in consumer spending terms over 2021-2040, due to reductions in poverty, growing urbanisation and a gradual transition from agricultural economies to manufacturing and service providers. 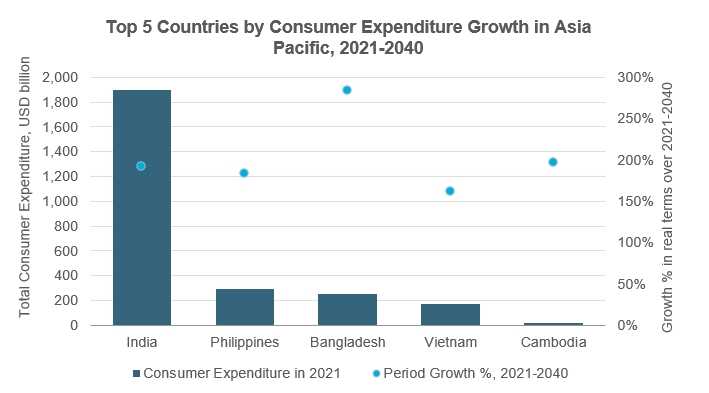 Asia Pacific and Africa also offer plenty of opportunities related to consumers at the bottom of the pyramid, who have not previously been addressed. For instance, the emerging middle class (or Social Class D) in several of the largest ASEAN economies, such as Malaysia, Thailand and Indonesia, represents the largest proportion of the population and is growing rapidly. Companies such as Panasonic are attempting to penetrate this consumer base. In 2021, Panasonic Thailand partnered with Thai company Siam Steel International to develop mid-priced modular homes costing THB5-10 million per unit with a completion time of 3-4 months. The key proposition was to target the growing number of affluent consumers looking for modern yet affordable living.

Consumers aged 65+ years are already playing a significant role in the economy, and their influence is set to expand further towards 2040. For example, this demographic is predicted to account for 21% of Social Class A – the most affluent consumers in the population (up from 15% in 2021). They are set to enjoy high average gross incomes, especially in developed markets, where they benefit from accumulated wealth, better social protection and multiple income sources. Furthermore, these consumers in developed countries often already own their homes and are less vulnerable to economic turbulence, such as interest rate changes. 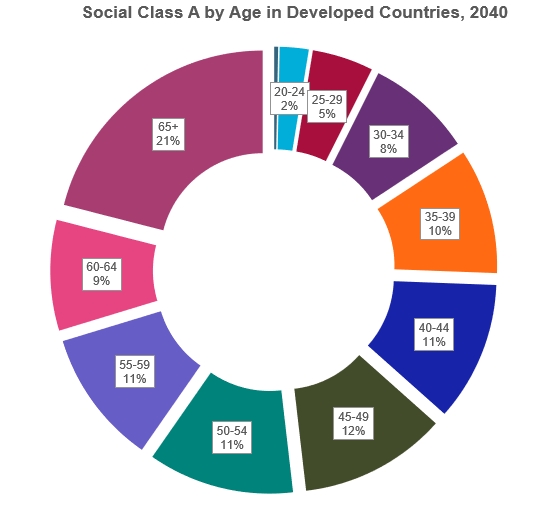 Changing lifestyles and increasing longevity also mean that ageing consumers are remaining active for longer and choosing to retire later. Rising female workforce participation will further support growth in more affluent older households over 2021-2040. As consumers entering the 65+ age bracket become digitally savvy, they are more likely to remain in their own homes, aided by smart home appliances and robotics to maintain their independence, sustaining their active consumer status for longer. From Amazon Alexa to Smart Rings by Evering, companies are targeting and helping this important consumer group to remain active and independent for as long as possible.

Evolving consumption patterns are evident around the world. A rise in the cost of living is motivating consumers to turn to saving and budgeting, in addition to searching for greater value in different forms. Although income and expenditure are growing worldwide, Asia Pacific presents significant untapped potential for companies and is set to be the largest global consumer market by 2040. The wealthy population continues to age, especially in developed countries where consumers aged 65+ years tend to be homeowners with multiple income sources, allowing for greater wealth accumulation. These consumers are willing to spend more to ensure comfort and independence in their own homes.

For further insight read our report, Global Income and Expenditure Overview and Trends.

Understanding the Southeast Asian Consumer in 2022

Over the near term, mounting inflationary pressure is set to limit purchasing power of the European population and curb discretionary spending growth. In the…

Income and Expenditure in Middle East and Africa

After decades of low inflation, economies, companies and consumers worldwide struggle to cope with the surging cost-of-living crisis. While the costs are…