As Africa gains increased attention from the global investors across a range of industries, Euromonitor International sees itself as a strategic partner for many players to explore the countries in Africa and thus our team has been active in understanding the local landscape in these countries. Earlier this year, our team visited key players in Egypt to understand market developments. Here are some of the key takeaways from our conversations with top players across a range of industries:

As Asia starts to slow, Africa has gained an increased focus of companies looking to increase their export activity. Africa is set to be the next big consumer market with demand driven by the growth of the middle class and rise in disposable income. 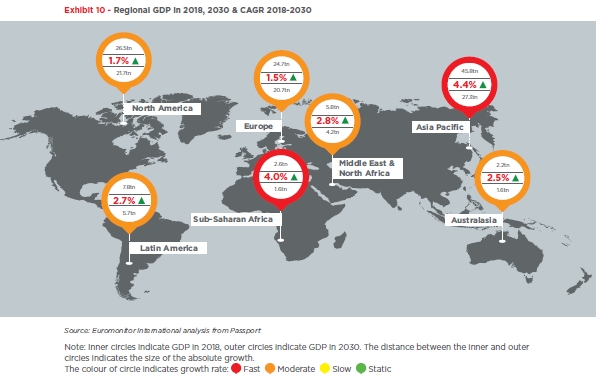 Lack of due diligence in Africa remains a key challenge

Proper due diligence on distributors and partners in these countries lack significantly. Some companies still prefer to fly their exports teams to investigate high potential countries and find distributors. More often than not, they reach an agreement but are usually one-off in nature and not sustainable for continued growth. Local players eagerly look for long term investors and continued business. With the African Continental Free Trade Area (AfCFTA) agreement officially entering into force, improving B2B matchmaking is one of the top priorities on the agenda. AfCFTA will be the largest trade zone in the world (1.2 billion people) increase intra-African trade by 52% by the year 2022, remove tariffs on 90% of goods, liberalize services and tackle other barriers to intra-African trade.

Governments look for increased participation from the private sector

The government is looking for flexibility and openness to the private sector. State Privatization program is expected to revive the stock market, with Eastern Tobacco floating 4.5% of its shares in March as the first to be offered in the government’s initial public offering program. Over the forecast period, more IPOs are expected such as Alexandria Mineral Oils Company, Alexandria Container and Cargo Handling, Abou Kir Fertilizers, and Heliopolis Housing.

The entrepreneurial ecosystem is developing and strengthening, with Egypt having key attention such that the country’s share of investment deals grew by 7% during 2018, representing 22% of all MENA investment deals. Further, various stakeholders in the market are eyeing the potential for growth through investments in local start-ups. Notable sectors are fin-tech, e-commerce, delivery structures and transport. The industry is maturing and becoming more experienced in terms of funding.

High-end Real Estate is slowing down. Developers are looking at opportunities in smaller units and international investment opportunities.

Big names in retail are exploring secondary market expansion, i.e. high potential cities in Egypt with increasing disposable income and urbanization. Between 2015 and 2030 the urban population will increase at nearly double (46.3%) the pace of the rural population, from 38.0 million people in 2015 to 54.5 million in 2030.

The travel industry is performing well, with many opportunities offered in the digital space for companies willing to invest and explore this area. Online travel ecosystem of the country is growing. International booking intermediaries are investing in improved user experience and offering content in Arabic as well as secure payment platforms.

To learn more about the potential opportunities in Egypt and Africa, click here.