Legislation: A Brighter Outlook or Clouds on The Horizon for Alcoholic Drinks?

Changing regulations and new restrictions are an enduring concern for alcoholic drinks companies. Two opposing directions of change are apparent in the industry: In response to the pandemic, some countries have introduced draconian alcohol bans, while others have allowed more flexibility in purchasing options. Looking into these changes can provide insights into the likely trajectory of legislation.

Neo-prohibitionism is on the rise…

Alcoholic drinks, and the on-trade specifically, have been high profile targets of efforts to stop the spread of Coronavirus (COVID-19), although evidence for some of the decisions taken remains contested. Anti-alcohol groups are using this time of increased health awareness to voice their concerns amid ongoing debate on the role of government intervention versus personal choice. However, the negative impacts of pandemic-driven alcohol bans provide a timely reminder of the unintended consequences of prohibition.

South Africa is perhaps the most obvious example of strict new restrictions being introduced. The South African Government has imposed multiple nationwide bans on alcohol since March 2020. The economic impacts have been significant, with an associated rise in illicit sales; reports indicate smuggling from neighbouring countries, robberies of alcohol from shops and home production. The lingering effects of these changes and strengthened criminal networks are expected to considerably outlast the duration of the measures themselves.

Opponents of an alcohol ban introduced as part of temporary lockdown rules in Turkey in 2021 argue the motivations were religious rather than practical. This illustrates a fundamental aspect of the regulatory debate – deep-rooted ideological differences in attitudes towards alcohol (influenced by various factors). 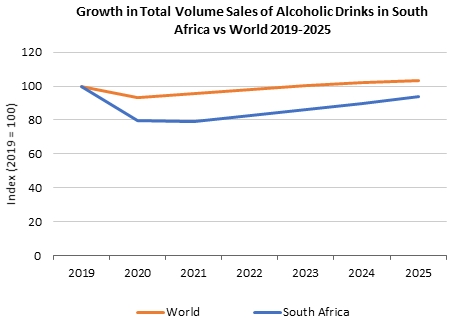 …Yet restrictions are being relaxed in key markets

COVID-19 has prompted a temporary relaxation of distribution rules in some key markets. Online sales and drinks-to-go from bars have proved a lifeline for struggling small businesses, and many consumers have been motivated, or able, to explore new purchasing channels for the first time.

Developments in the US are significant given the market’s importance to global alcoholic drinks. During the pandemic, legal restrictions have been relaxed in a number of US states to allow home delivery of alcohol from retailers and/or producers, in moves that were temporary initially but becoming permanent in many cases. Uber’s acquisition of Drizly helps to demonstrate the perceived future potential of alcohol e-commerce and delivery in the US. Further expansion of direct-to-consumer shipping opportunities would provide a particular boost for micro brewers and distillers.

The balance appears to be tipping towards liberalisation

Specific new examples of toughened regulations should not be ruled out. COVID-19 has brought health concerns under the spotlight, and debate regarding whether there is a “safe” level of alcohol intake continues. Some governments will use this opportunity to step up efforts to reduce consumption, particularly where per capita levels are high.

Targeting harmful consumption, rather than alcohol in general, will remain the core focus of regulations – for now. The industry is already highly engaged in these efforts. There are challenges to come, but in many cases, industry involvement will continue to play a role in defining the details of evolving legislation.

Increasingly significant tax revenue and employment, plus renewed support for a struggling hospitality sector are driving reluctance to place additional hurdles in the path of alcoholic drinks sales. Many of the rules relaxed during the pandemic are being viewed in a positive light, accelerating a change in mindset.

For the near future at least, global alcoholic drinks legislation is being shaped more by liberalisation trends than enhanced restrictions.

The no/low segment achieved booming volume growth on a global level; an intoxicating performance and the exact opposite of the severe declines faced by the…