In 2019, the Mexican government announced it would revise its tax legislation on several consumer products, including a caffeine tax on energy drinks. As part of the Impuesto Especial de Productos y Servicios (IEPS) originally established in 2011, an energy drink was defined as a beverage containing 20 milligrams of caffeine per 100 milliliters or more. Such a product was taxed at 25%. Subsequently, many energy drink producers chose to reformulate their products to contain less than the 20 mg threshold. As a result, many brands were not subject to this tax which resulted in less tax collected by the government. Now, the Mexican government intends to expand its definition to include all beverages that "contain a mix of caffeine and taurine or [other ingredients] that produce similar stimulating effects."

Source: SHCP *Data projected for full year 2019 with data ending in May

Because sales of energy drinks are motivated by low prices, this revised law stands to significantly impact the category's performance in the coming year. We’re using Euromonitor's Soft Drinks Forecast Model to quantify the potential impact of the proposed legislation.

According to the model, price is a negative driver in volume sales of energy drinks. This means that as price increases, we expect volume sales to decline. As an exercise, if we look at the isolated impact of product price on volume growth, every percentage point increase in energy drink price results in a decline in volume sales of 0.37%. With the implementation of a 25% increase in product price due to the tax, we would expect that the category's volume sales would decline by roughly 9.25% from its expected average yearly growth (CAGR) of 21% to a growth of about 11%.

However, price is obviously not the only consideration in this scenario. Consumer habits are resilient and ‘habit persistence’ will remain the largest contributor to growth in volume sales after this period, which will likely keep the category growing despite the negative overall impact of higher product prices. This is due to the perceived functionality of these beverages for many daily consumers in Mexico.

Other consumer-led ‘soft drivers’ could also impact category performance. The expansion of an energy drinks tax could increase public scrutiny of these products, with the media amplifying concerns about caffeine intake. Changing consumer attitudes to caffeine reduction (like sugar reduction) may have a compounding effect, further reducing sales as consumers begin to migrate to alternative forms of energy. 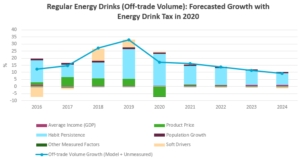 Although we expect the growth rate to decline as a result of the tax, the Mexican energy drinks category is likely to continue to grow, albeit at a substantially reduced rate. This may seem like an anomaly, since the elasticity of product price for energy drinks is higher than most other soft drinks categories.

However, given the historic double-digit growth and highly dynamic nature of the Mexican energy drink market, the category is likely to enjoy continued annual growth due to the functionality of the product, which has successfully penetrated daily beverage consumption for consumers engaged in high-stress or unconventional working environments. Energy drinks are expected to continue their positive trajectory in the region’s largest energy drinks market.