Cities are increasingly leveraging sports to demonstrate socioeconomic power on the world stage. This can be observed by the rising number of major sporting events being held by fast-growing markets in Asia and the Middle East. It includes Qatar, which became the first Arab country to host the FIFA World Cup in 2022.

Yet, becoming a global powerhouse for professional sports remains a challenge. It requires an all-encompassing approach which considers structural, cultural and socioeconomic aspects such as ample investment in infrastructure, a robust domestic sports environment, and a large population having an ability and willingness to spend on sports.

Infrastructure investment is needed – but it comes at a high price

In terms of accessibility, the 2010 FIFA World Cup in South Africa led to the government spending USD1.5 billion on transport, which included improving road, rail and air and sea links. The 2016 Rio de Janeiro Olympic Games saw USD340 million invested in the tourism industry, which required 70 new hotels to cope with the influx of athletes and tourists.

While governments bet on mega events to spearhead local and national development, this comes at a high price. For example, the Rio de Janeiro Olympic Games in 2016 cost USD13.2 billion – 15% of the city’s GDP for that year, with some venues having fallen prey to post-games abandonment. For cities to become major sports hubs, the return on investment needs to be achieved through a continued legacy of high-calibre global events.

A strong legacy and heritage in sports can inspire a city to host sporting events. This can reflect the norms of the local community to engage and participate at local events, giving organisers greater confidence of strong attendances.

Some of the most popular cities for professional sports include Tokyo, Melbourne and London due to their large array of sports teams and history in sporting excellence. For instance, London is home to one of four major Tennis Grand Slam Championships at Wimbledon, attracts thousands of rugby fans during the Six Nations championships at Twickenham where England play their home games, and plays host to Premier League football games, which in the 2021/2022 season, saw a weekly combined average attendance of over 250,000.

Moreover, a strong local interest in sport can stand as a precursor for atypical events in the context of the local market. For example, the NFL international series in London has continued to record strong attendance figures with over 86,000 at the last game on 30 October 2022, despite the sport having little penetration relative to football and rugby. 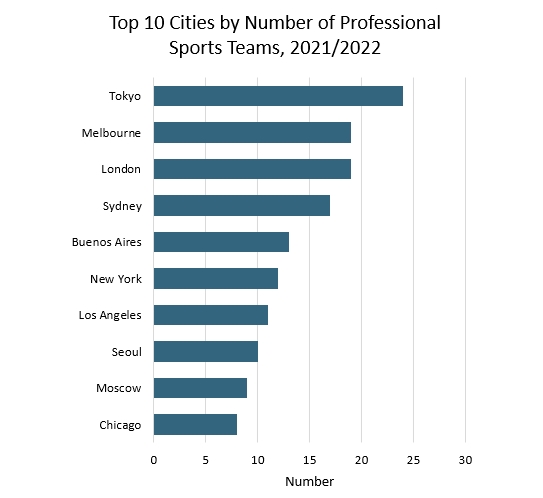 This is one reason why the global sportswear giant, Nike, has become the first official sponsor of the 2028 Los Angeles Olympic Games in a deal that reports suggest is worth between USD200-300 million – the most the company has committed in Olympics sponsorship. In 2022, Los Angeles is the third largest consumer market (behind New York and Tokyo) globally and the 19th most affluent city based on per capita income across over 1,200 cities.

Nonetheless, emerging and developing markets with high growth potential see global sports as a way to accelerate economic progress. Sports is an opportunity to tap into nascent fanbases; for instance, in the last decade, Formula 1 has incorporated more emerging cities into its race calendar from the Middle East and Asia. 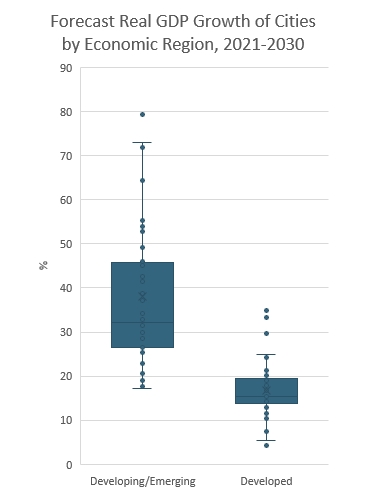 Additional ingredients will be needed to achieve future sporting success

Looking ahead, cities’ quest for sporting dominance will be supplemented by other factors such as sustainability and inclusivity. Sports fans are increasingly demanding authenticity and transparency, refusing to be silent spectators. According to Euromonitor International’s Lifestyles Survey, fielded in 2022, one in three respondents mentioned that they prefer brands that align with their values. While this adds further layers of criteria, standing behind the values which support the common good can lay a positive foundation for the sports city of the future.

For further discussion of this fascinating topic, read our report, World Market for Professional Sports

As Foodservice Recovers, What Can Food Retail Do?