This article is part of a series on COVID-19 focusing on how the outbreak is affecting industries.

Unlike the 2008-2009 Global Financial Crisis, which started in sub-prime financial loans and spread to other sectors, the impact of COVID-19 is harder to ascertain as there are not many indicators to explain company performance. Income elasticities, which measure category volume sales change relative to GDP change, appear to be a good measure of company risk in this scenario, showing a high correlation with the recent stock market performance.

FMCG as a relative safe haven compared to broader market

Not all companies are equally exposed to COVID-19 risk. The SP500 index, measuring the Top 500 companies in the US, declined by 28% over 21 February-17 March, with the largest declines concentrated in travel and transportation, banks and some tech companies, where stock prices dropped in excess of 30%, and even 50%.

In such a context, consumer goods are a relative safe haven; the declines, while steep, have still not been as pronounced as in other sectors. Stock prices for typical FMCG companies like Unilever and Procter & Gamble dropped 15.6% and 6.7% respectively over 21 February-17 March, which is less than the 28% in the overall stock market. Many consumer goods are considered necessity products and thus do not react to slowdowns as much as products in other sectors.

In the chart below, we have plotted company income elasticities weighted by company country/category exposure against the stock market performance over 21 February-17 March 2020. The riskier companies as measured by income elasticity are on the right, such as adidas and Estée Lauder. Companies on the left of the chart have lower income elasticity, like Kimberly-Clark and Kraft Heinz. 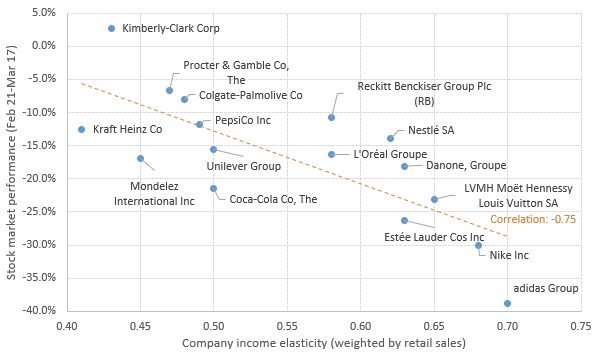 Note: Income elasticity refers to category volume sales change as a result of a 1% change in GDP growth. Elasticities are weighted by retail sales of each company in every country and category

We could take Unilever as a benchmark FMCG company, with a strong presence in both beauty and foods; it has an income elasticity of 0.5 and its stock price declined by 15.6% over 21 February-17 March. Interestingly, Estée Lauder appears high on risk exposure dimensions; its chairman, Leonard Lauder, coined the famous phrase “lipstick effect”, which stipulates the beauty industry’s resistance to the recession, but the company seems to be responding to the recent slowdown more steeply compared to other beauty companies.

Not all companies align perfectly near the correlation line. Kraft Heinz, for example, has declined more than its low-income elasticity would suggest, as has The Coca-Cola Co. On the flip side, Nestlé’s stock price declined by 13.9% over 21 February-17 March, but its income elasticity suggests the company’s portfolio could be more risk-sensitive. Its Nespresso coffee business, in particular, appears to show high-income elasticity, which could fall more in a recession environment.

Why look at the stock market?

Stock markets are forward-looking by nature and are the best real-world measure of company risk. Companies that are most likely to see a negative impact on earnings from COVID-19 have already declined the most, as investors attempt to price-in all the developments – economy and/or company level – when they happen.

The period since Feb 21 fits the analysis best since markets started to take a hit on 24 February in particular, when COVID-19 cases in Italy made it clear that the virus was not going to be contained in China, triggering the global market fear. As a result, the SP500 declined by 28% over the 21 February-17 March period (taking end day closing prices). 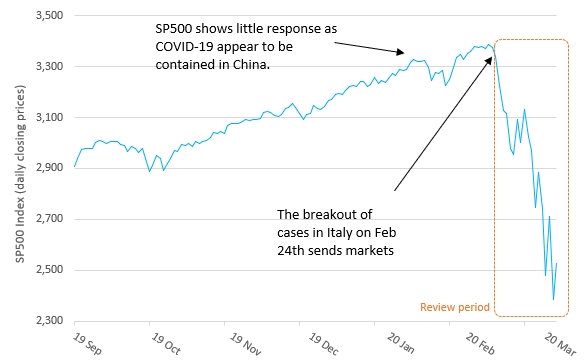 Income elasticity as a measure of company risk

We have compared 16 select FMCG companies against recent stock market declines, and income elasticities appear to be a good measure of a company’s exposure to COVID-19-related risk. While some companies stand out as outliers, overall, there is a strong correlation between the two: companies that appear riskier on elasticity dimension have also recorded the largest declines on the stock market.

While this is not intended to show overvalued/undervalued companies (many other factors such as how leveraged companies are could also have an effect), it shows that income elasticities could help explain the risk exposure of companies to such pandemic scenarios at country/category level.

Pandemic Accelerates Use of Cards and Adoption of Financial Services

Global Recovery Tracker: Omicron Is the New Downward Risk to the Recovery

Home Improvement and Gardening: Industry Trends and Looking Ahead

Further strong value growth is expected in 2021 for edible oils in Eastern Europe. However, while growth in 2020 was mainly driven by more home-cooking due to…