Southeast Asia is known to have tremendous growth potential when it comes to high-value products, with consumer appliances no exception. Spending on appliances in Southeast Asia is still at USD100 per household annually, which is significantly lower than in Western Europe and North America, at USD600 and USD500 respectively. Furthermore, low product penetration within lower- to middle-income consumer groups will account for stronger forecast growth as the economy continues to grow rapidly. For example, we can see from the chart below that the possession rate of air conditioners remains low in most Southeast Asian countries, despite being a necessity due to the hot weather and pollution. As average disposable income grows, air conditioners will become more accessible for more consumers. Hence, brands will need to focus their marketing efforts on building awareness and educating consumers, some of whom will be using appliances for the first time. At the same time, engaging middle- to higher-income consumers remains crucial to grow value sales through upgrades. 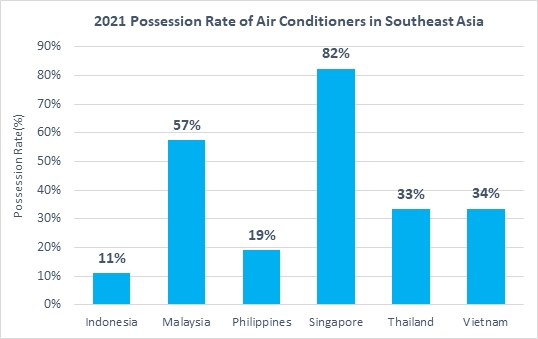 COVID-19 pandemic marks a new start for the industry

While the pandemic brought unprecedented struggles for most industries, consumer appliances in Southeast Asia saw growth in both 2020 and 2021. Lockdowns and travel restrictions created a shift towards the home as a hub, where families and individuals do most of their activities. According to Euromonitor International’s Lifestyles survey 2021, 66% of consumers in Southeast Asia work from home at least weekly, and 70% cook or bake at least weekly. Hair care appliances, such as hair trimmers and hair dryers, became the strongest growth category, as people tried to avoid visiting professionals for grooming treatments during the pandemic. In addition, refrigeration appliances and microwaves saw dynamic growth, as households stored more frozen food and increased their cooking activities. This is expected to continue in the next five years, as working from home becomes a norm and people are expected to continue to spend more time at home.

Energy efficiency is a must-have feature

Energy efficiency is probably the most defining aspect of consumer appliances in Southeast Asia, as consumers tend to choose products with the lowest possible energy consumption. Governments in most Southeast Asian countries are still offering energy subsidies, which help many people with the cost of using appliances at home. However, this continues to change, as governments slowly increase the cost of electricity and are expected to eventually remove all subsidies. For example, before 2017, around 75% of households in Indonesia received the government’s electricity subsidies. This then changed to 50% in 2017, and the government is expected to remove all subsidies in the next few years due to budget overspends during the pandemic. As the cost of electricity continues to increase, consumers are becoming more careful about the money they spend on their monthly electricity bill. This resulted in manufacturers actively innovating in terms of energy efficiency regionally, with some products only released in the Southeast Asia market. For example, a Panasonic 2-door fridge-freezer in Indonesia goes as low as 80-watts energy consumption, compared with an average of 200-300-watts for similar size fridge-freezers in other regions. Watt-control features have also been used by LG and Mitsubishi air conditioners, offering different operating wattage options depending on the number of people in the room.

Governments have also started to recognise the importance of energy-efficient products and support manufacturers in building awareness. In Malaysia, every purchase of an air conditioner or refrigeration appliance with 4- or 5-star energy rating receives a MYR200 rebate. Meanwhile in Vietnam, the government held the “most efficient product award” in recognition of the most energy-saving and environmentally-friendly brand in the country.

The pandemic has also driven the health and hygiene trend in the region, due to concerns about contracting the virus. This is not a trend that will stop when the impact of COVID-19 passes, as people are generally becoming more concerned about their safety in the home, especially families with young children. Most manufacturers have since emphasised more health and hygiene-related features in their social media marketing, with claims such as “eliminates 99.9% of bacteria”. Health and hygiene-related products such as air purifiers saw strong double-digit growth during the pandemic, and this category is expected to show double-digit growth in the forecast five years, further emphasising the importance of innovation in this area.

“Affordable premium” is the way to go for Southeast Asia

While consumers are expecting new innovations and feature-packed products, concerns about product pricing remain. In short, consumers in the region want premium products at the lowest price possible. Hence, a balance between unit price and innovation is crucial to gain market share. This will be the final formula to ensure the strong growth of the industry over the forecast period.

Elevated Prices of Appliances to Continue into 2023

This briefing examines how the hi-tech goods industry is performing globally and in the largest countries in terms of hi-tech goods output. The report also…

Western Europe saw a clear spike in sales of small appliances in 2020, when Coronavirus (COVID-19) hit the region, as consumers were cooking and eating more at…

How Apple and Other Electronics Companies are Managing Inflation

Faced with high inflation, caused in large part by rising energy costs, manufacturers are trying to find ways to avoid increasing prices, as consumers are…