The beauty and personal care industry has a long-lasting history of differentiating products according to gender. However, due to changing consumer values that place less emphasis on distinct male-or-female characteristics and more emphasis on inclusivity, this traditional gendered approach is changing in the United States.

While some genderless products such as unisex fragrances are not newcomers to the beauty industry, new genderless products are gaining popularity in skincare, colour cosmetics, and personal care products. As the genderless beauty trend spreads across product categories, it is imperative that beauty brands evaluate the trend’s potential to disrupt the market and create a new industry norm.

Will genderless beauty become a long-lasting trend that will change how beauty and personal care players in the United States approach the concept of beauty?

Awareness of the Pink Tax

Pricing differences are one of the main drivers of genderless beauty. The Pink Tax refers to the upcharge for products and services marketed specifically towards women, while equivalent male products are sold at lower price points.

In fact, a 2015 study commissioned by the New York City Department of Consumer Affairs found that on average women pay 7% more for products marketed towards women, with the highest price discrimination found in the personal care category at an upcharge of 13% more for women’s products. A follow-up study conducted by the U.S Government Accountability Office in 2018 confirmed the pricing discrimination, finding that women paid more for 5 out of 10 personal care product categories analyzed. 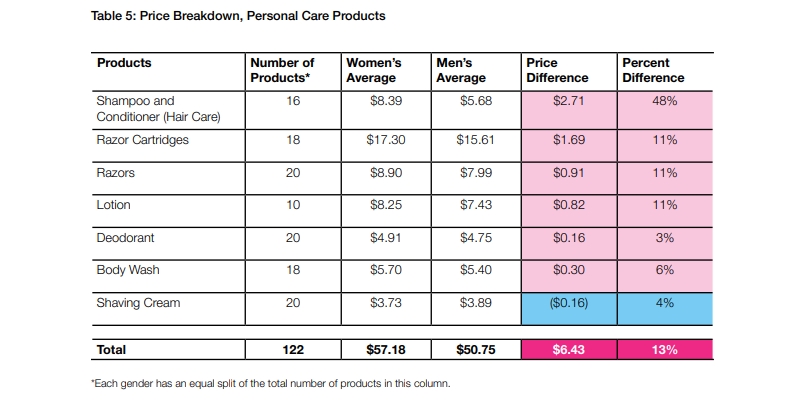 While a few dollars’ price difference seems minimal, when considering the frequency of beauty and personal care purchases over the course of a year, the cost is striking. The New York City study found that annually women pay an additional USD1,351 for products due to this pricing difference.

Luckily, consumer awareness of the Pink Tax, amplified by social media, has forced many companies to rethink their product pricing. Razors were one of the first product categories scrutinized for pricing discrimination, with some women even opting to regularly purchase cheaper men’s razors.

As a result of consumer awareness, the shaving industry was transformed with the rise of subscription shaving companies that continue to fight with women against the Pink Tax. For example, direct-to-consumer subscription service Boxed.com recently launched a new #RethinkPink campaign, vowing to match the cost of their women’s and men’s products. The same company also aims to reduce the luxury sales tax on feminine products, referred to as the “tampon tax” in the U.S. and Western Europe.

Unfortunately, progress on the legislative side in the U.S. has been much slower. However, two attempts have been made to pass a Pink Tax Repeal Act which would make it illegal for companies to charge different prices based on gender for both products and services.

Another important factor contributing to the rise of genderless beauty products in the United States is changing consumer values related to gender, with Millennials, born between 1985 and 1994, and Generation Z, born between 1995 and 2009, driving these changes. Compared to their Baby Boomer parents, a subset of American Millennial families are seeking to rebalance traditional gender roles between mothers and fathers, husbands and wives, and partners and spouses, pursuing a lifestyle for their children that is less fraught with gender stereotypes.

In some cases, among progressive, higher-income Millennial circles, a subset of parents seek to raise their children devoid of gender distinctions through the practice of raising “theybies”, in which parents do not reveal the biological sex of their children to anyone. While a push for gender-fluidity and inclusivity is present in the U.S., it is important to note that a more gender-neutral approach to child-rearing is mostly seen among mid- to higher- socio-economic groups in developed countries, such as the U.S. and the U.K., but that it is not yet the norm in the U.S. overall.

This shift in family life corresponds to rising demand for gender-neutral toys, clothes and toiletries amongst other things, with beauty and personal care products representing an extension of this type of gender-neutral positioned consumption.

Generation Z is dismantling gender stereotypes even further, as they have been a key driver of a genderless view of society. Given that by 2030 Generation Z will be the largest population segment with increased spending power in the U.S., it is likely that traditional gender rules will continue to fade in order to make room for genderless and unisex products that better align with consumers’ values.

These changes in consumer values are translating to a shift in product claims that consumers seek in their beauty items. Euromonitor International’s Beauty Survey found that the number of global respondents who are seeking skincare and hair care “suited to or positioned for my gender” has been decreasing from 2016 to 2018 among male and female respondents, suggesting that gender positioning is slowly starting to lose relevance.

Interestingly, Euromonitor International’s Beauty Survey global results found that male respondents were often more concerned with buying beauty products suited to their gender. This is likely due to social taboos regarding masculinity that deem men “feminine” for using beauty products. However, those taboos are slowly diminishing in the U.S. as men’s toiletries products sales experienced a healthy 7% compounded annual growth rate from 2013 to 2018 and is expected to grow 6% in current value terms in the U.S. by 2023.

Women have always been the key target group for beauty companies, but as more men become open to using beauty products, companies are starting to opt for unisex beauty products to satisfy all customers rather than creating a separate men’s product line.

How are companies adjusting to this trend?

One category where unisex positioning has experienced rapid growth is fragrances. Unisex fragrances sales exhibited high growth in 2018 globally and when looking at more developed markets the trend is amplified. In the U.S., unisex fragrances exhibited double-digit growth this past year, suggesting that changing U.S. consumer values surrounding gender roles and gender fluidity are translating to a demand for genderless fragrances. From Calvin Klein to Tom Ford and Hermès, brands are creating lines of unisex fragrances that simply smell good, rather than constraining customers into a binary choice. 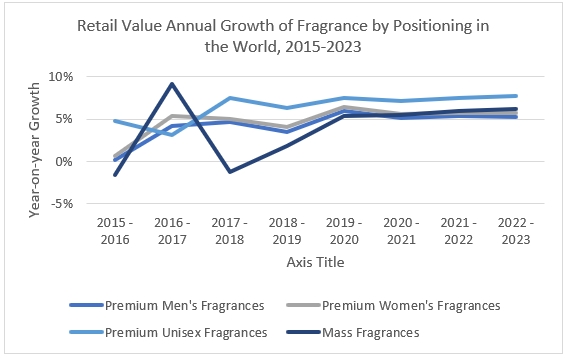 Moving past fragrances, many colour cosmetics brands are responding by having gender-neutral positioning and showcasing both men and women in their advertisements. One particularly successful brand is U.S. indie brand Milk Makeup. The brand appeals to both genders by creating clean unisex packaging without additional tools required for application. Milk has also made considerable headway in enticing male consumers to their brand, every ad campaign thus far has featured men.

Discussion of whether products should be positioned by gender reaches far beyond beauty. In recent years, children’s toys have been facing scrutiny for being heavily gender-coded and some major players, such as Target, have even stopped separating store toy aisles for boys and girls. The genderless trend is also found in the fashion industry with the emergence of androgynous clothing lines accompanied by androgynous models.

While a genderless or unisex product may not work for every company across industries, shifts in consumer values will continue blurring gender boundary lines, encouraging companies to embrace gender-neutral marketing approaches. As a fiscal opportunity, a gender-neutral approach also widens a brand’s target audience and increases the potential for sales. In the end, genderless beauty comes down to one thing; prioritizing product functionality.